Armenia needs waste recycling as much as Europe does 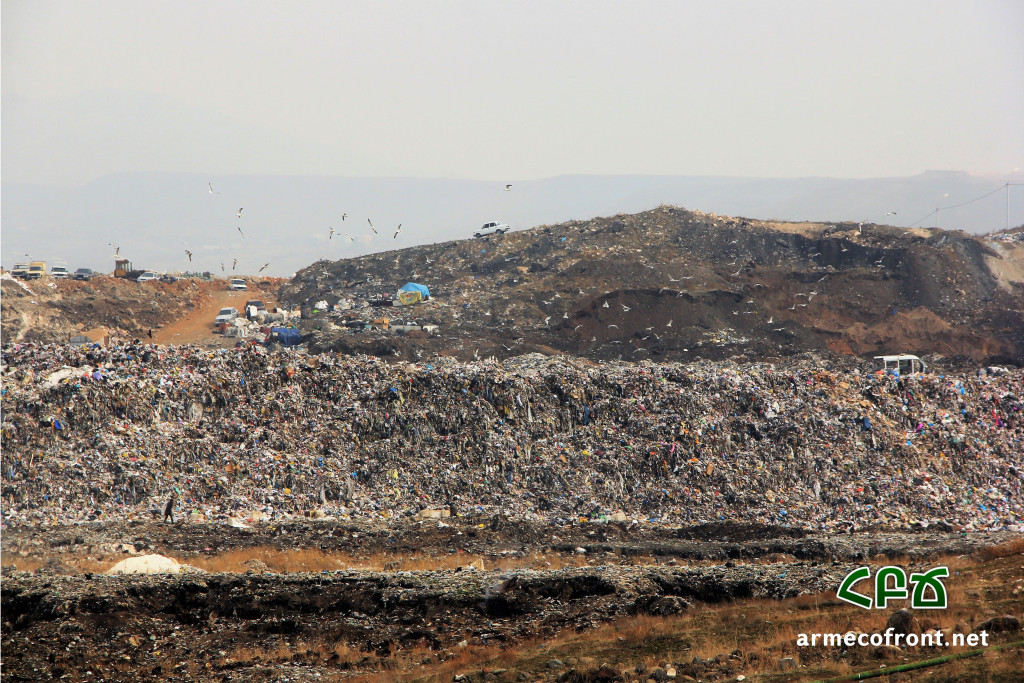 Several weeks have passed since we posted our video material about the new landfill project. The question of landfill construction built with loans and grants and without waste recycling component was raised inside Armenia, as well as with some of the members of the European parliament. The correspondence with the banks that finance this project also continued.

Interestingly enough, European Bank for Reconstruction and Development (EBRD), which refused to communicate with Armenian Environmental Front (AEF) civil initiative as a result of [bitter] questionings of the latter on Amulsar mine project, reacted to AEF’s questions regarding the landfill project although answering in an arbitrary way. The arbitrariness has been the way the bank found fit to answer our letter, as they omitted the central questions raised in our video as well as letters regarding including waste sorting and recycling component in the project, meanwhile, they responded that the amount of trees removed from the project site will be replaced.

“We would like to assure you that, within the scope of the Project, all trees that need to be removed in the Project area will be replaced through tree plantation works. More precisely, two replacement trees/shrubs will be planted for each tree/shrub removed to ensure that there is no loss in the number of trees and shrubs”, states EBRD’s most recent response.

As a reminder, although the project description states that EU requirement for waste sorting and recycling is not included in this project, yet in their previous reply again arbitrarily they mentioned that the recycling component is in a discussion phase with the Yerevan municipality. No other statement. However, such superficial answers do not yet release any side from liability.

In its previous letter European Investment Bank (EIB) as well left the responsibility for the recycling component on the Yerevan municipality. While in response to our recent video material, trying to again bypass our main questions, the Fraud Investigations Division of the Inspectorate General of the Bank contacted informing us that they would like to investigate the possible corruption risks. They also informed about possible need to receive additional information and that’s in circumstances when the project has not yet started and therefore hardly anyone will be able to provide them with facts on corruption. This way this bank too tried to avoid answering the main questions.

Since another 8 million euro grant is provided by the EU Neighborhood Investment Facility (NIF),  a letter was sent to European Commission, however there has never been a response from this body.

The following should be highlighted.

In February 2018, EU ambassadors approved new rules on waste management and recycling. Thanks to these rules, recycling will increase and the re-use of the materials will be encouraged in the EU. Moreover, legally binding targets for waste recycling and the reduction of landfilling with fixed deadlines will be established with the new rules. As a result EU member states will ensure that by 2035 the amount of municipal waste landfilled is reduced to 10% or less of the total amount of municipal waste.

Now the question is why recycling is so highlighted in the EU, as well as there is a target for reducing the number and size of landfills, while outside the EU, European institutions fund a landfill project that not only does not meet the EU requirement for waste sorting and recycling, but it will also have limited lifespan of around 30 years and will cover around 30 hectares resulting in planning another landfill after the end of its lifespan.

Isn’t this European policy discriminating between the EU citizens and non EU citizens as well as nature? Do they believe in Europe that environmental protection recognizes borders and that anything outside the EU is not a threat to their environment? Of course we can highlight that the EU and European banks are not obliged to implement projects in countries like Armenia that will promote the well-being of the society and the nature, especially considering that the local government itself has no such willingness. However, by funding unsustainable projects these institutions become complicit in the pollution of the environment, decline in life quality and other problems.

Moreover, EBRD’s Environmental and Social Policy clearly states, that “the EBRD, as a signatory to the European Principles for the Environment, is committed to promoting the adoption of EU environmental principles, practices and substantive standards by EBRD-financed projects, where these can be applied at the project level, regardless of their geographical location. When host country regulations differ from EU substantive environmental standards, projects will be expected to meet whichever is more stringent.”

EU principles (adopted back in 2008) are not only directed at waste recycling, but also waste recycling is more preferred to energy recovery from waste (waste management hierarchy). The possibility to recover energy from waste was hinted in the letter received from Armenia’s government.

Environmental and Social Principles and Standards of the European Investment Bank also define that Bank’s projects implemented outside the EU should follow national, international and EU standards for environment. Where EU standards are more stringent than national standards the higher EU standards are required.

According to the public hearing held on March 26 in Yerevan, there is no recycling component in the project yet. Yerevan municipality’s comments were presented during the hearing, according to which the waste that reaches to the landfill is not fit for recycling. Logical question rises as to how e.g. a polluted paper should be recycled if initially it was not separated by the individual for recycling purposes. The municipality then states that waste should be sorted in the initial phase and only the waste that is unfit for recycling should reach the landfill. The sorted waste will go to recycling companies. A question however remains unclear as to how the sorting process should be organized – should the individuals start sorting out the waste, or they would dump waste as they do today and there will be a sorting facility, where the waste will be sorted out? The logical process is obviously the first option, since in case of the second option as the municipality itself mentions – the waste that reaches the landfill (or in this case the sorting facility) is already unfit for recycling, therefore the municipality and citizens should take care doing the sorting process.

Moreover, if we are now dealing with a new component in the project, i.e. addition of the waste sorting in the project, then the updated version of the project is expected with the description of waste that will be sorted, process of waste sorting, types/list of recycling companies the sorted waste will be sent to, etc. After getting introduced with this new updated project can we assess if the municipality has serious plans for waste reduction or this is just a cover up aimed at the public and the European side.

Reminder, there is a clear public demand directed to both Armenian government and Yerevan municipality, as well as to European bodies funding the project to include waste sorting and recycling component in the project.

Posted On 28th October 2016 ~ 0 Comments
Since the unmanageable risks of mining in Amulsar are not properly assessed by Armenia’s government, the mine should not be exploited. This is one of…