Abandoned mine of Tandzut is located in Lori region, 6 km away from Vanadzor town. It was discovered around 120 years ago, while its operation was stopped in 1926. Armenian Environmental Front (AEF) civil initiative presented some details on this mine and promised to carry out analysis of water from this location in laboratory conditions.

To have clear understanding of the reality we visited the site on 12 September, 2017 and took samples of water. We took two samples – one from mine site, second from a location 2.5 km down the mine, prior water streams mix with Tandzut river. Even during sampling it was clear that enormous amount of acid drainage is taking place even today as a result of which acidic water possibly containing heavy metals first flows into Tandzut river, then flowing through Shahumyan and Vanadzor, ends up in Pambak river.

For having scientific grounds, two samples were transported in fridges to central analytical testing laboratory of RA NAS Ecological-Noosphere Studies Center (licence No. 027/T-027). The analysis of samples were shocking, which actually confirmed our worst predictions. According to those, hydrogen index in water, i.e. pH, which describes acidity of the solution, has surpassed the norm (7) turning very acidic and in 1st sample its level was 1.58, while in 2nd – 2.46.

It is scientifically proved that in this type of over-acidic environment acid rock drainage is taking place, as a result of which the concentration of heavy and dangerous metals and various ions increase in the water. 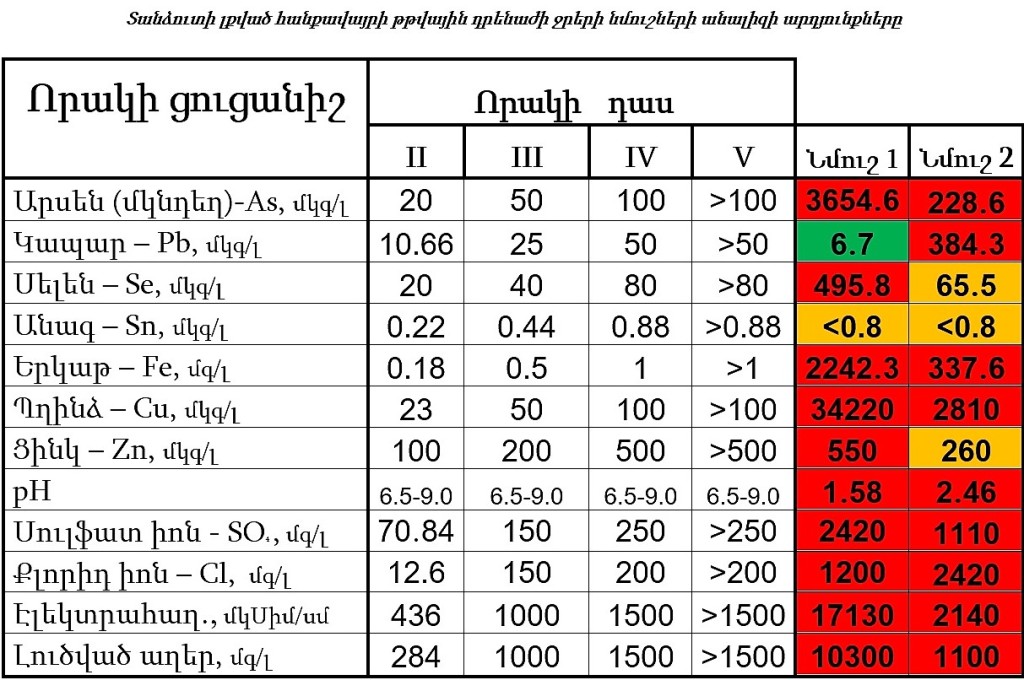 The analysis of concentrations of 6 dissolved metals out of 7 showed excess of the norms ten, hundred and even thousand times. The norms are set in the N 75-Ն decision of the RA government on “Setting standards for maintaining quality of the water in each area of water basin management based on characteristics of the location”, adopted on 27 January, 2011 for water basin of Debed river. According to this decision, the ecological norm in this location is 2nd category of good quality.

In the 1st sample which was taken from the abandoned mine area, arsenic concentration was 183 times, selenium – 25 times, tin -3.6 times, iron – 12455 times, copper – 1488 times,  zinc – 5.5 times exceeding the above mentioned ecological standards. Only lead did not exceed the norm. 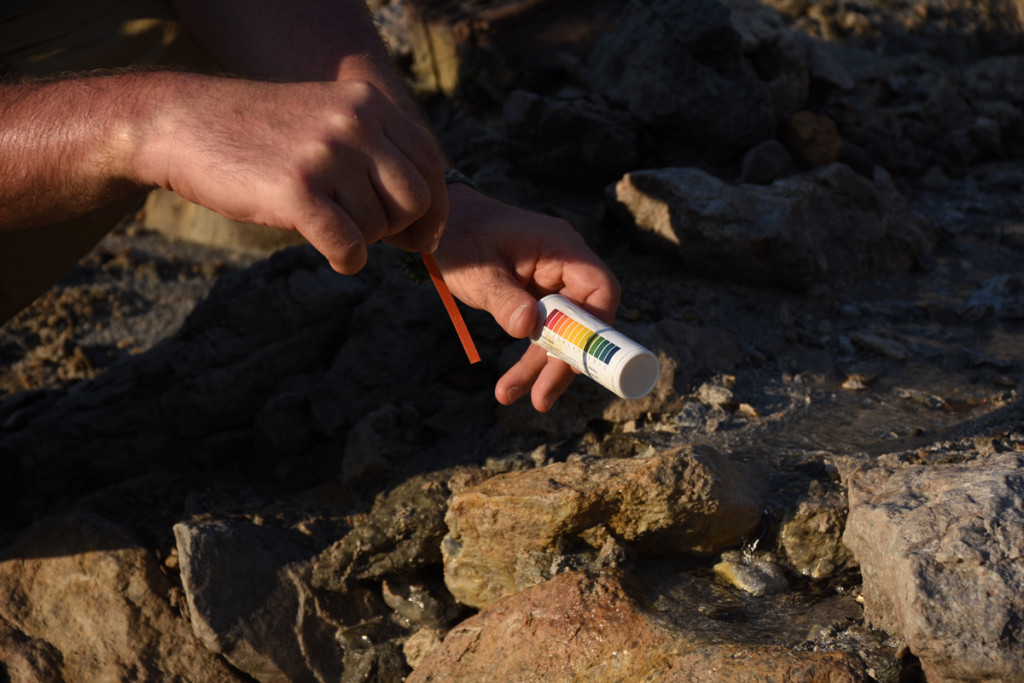 In case of 2nd sample taken from the location 2.5 km down the mine, prior the water streams mix into Tandzut river, concentration of arsenic was 11.4 times, lead -36 times, selenium – 3.3 times, tin -3.6 times, iron – 1876 times, copper -122 times, zinc – 2.6 times exceeding the above mentioned ecological norms. This means the pollution in huge amounts is also present in a location 2.5 km away from the pollution source.

Electrical conductivity as well as dissolved saline in the samples was also determined, which as well exceeded the permitted limits. In case of 1st sample accordingly 39.3 and 36.3 times, in 2nd sample 4.9 and 3.9 times. Almost all of these indexes also exceed the ecological norm for 5th category bad quality water set by the above mentioned decision of the RA government. 5th category bad quality pollution is the highest category and this type of water is forbidden for irrigation purposes.

There is no need to prove how this amount of concentrations of heavy and dangerous metals and other substances negatively affect the environment and health of humans. It is obvious that this type of toxicity is incompatible with biological life there. We were able to analyze only limited amount of substances. But we are sure that if the analyses are more wide scale, similar excess can be registered for other substances. 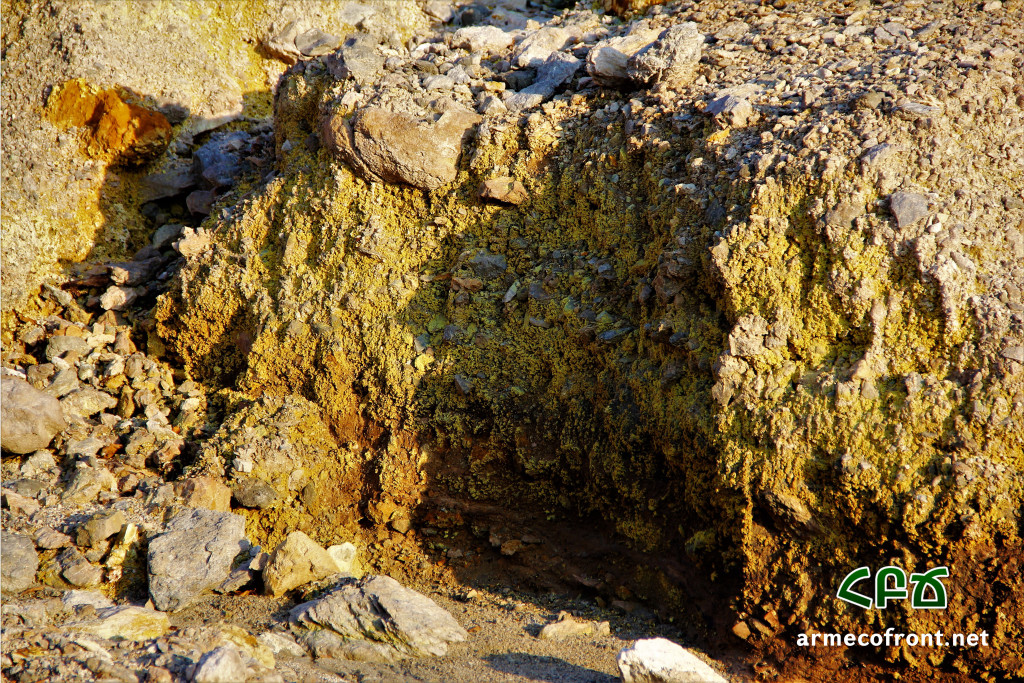 The question now is when state bodies will understand the importance of ecological security and carry out evaluations of similar problems, prevent threats and neutralize the polluting sources and contaminated areas. In the answer to questions we sent to the RA prime minister months ago, the Ministry of Nature Protection mentioned that this type of activities can be implemented with money from Fund for preservation of environment. We think it is high time to act aside from speaking.

We call on the RA Ministry of Nature Protection to implement detailed study of acid drainage in abandoned Tandzut mine, as well as another abandoned mine we wrote about – Kavart. We also call on the ministry to design, install and take care of water flow cleaning stations, carry out full clean up of water and soil contaminated with acid drainage. Only after these actions bring positive results, the RA government can have moral right to speak about new mine explorations or exploitation.

Besides, Kavart and Tadzut abandoned mines are not that big and cover only a few hectares. Meanwhile in Armenia there are metal mines which cavities, waste rock dumps and tailings cover hundreds of hectares. This means that the contamination from these mines will be hundred times more than what we presented in cases of the above abandoned mines. AEF will continue voluntarily explore and study acid drainage and other contamination from mines in Armenia. We also ask the citizens of Armenia to alarm the RA Ministry of Nature Protection when discovering similar issues (hot line 011 818 559) and demand actions. In case of no response please write to our email (armecofront@gmail.com). 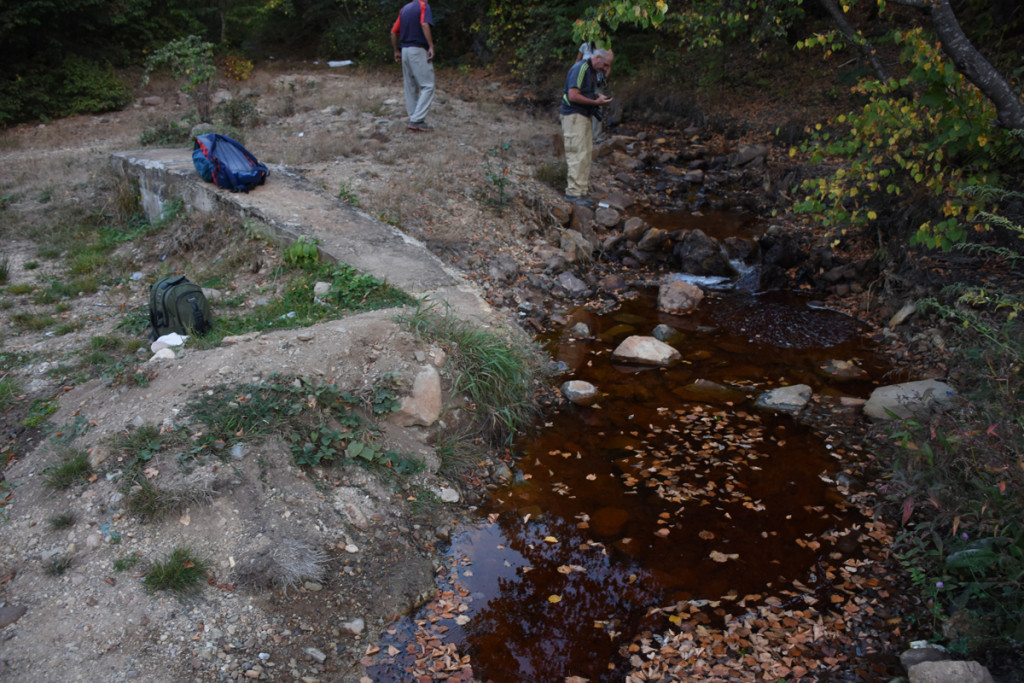 If we imagine the level of contamination in case of small mines in Kavart and Tandzut, we can imagine the threat of contamination in Jermuk’s mineral waters and water in Sevan lake, taking into account that in Amuslar 10 million tons of ore is planned to be extracted and processed, while the open pit mine, waste rock dump and cyanide heap leach facility will cover several hundred hectares.

Concluding, we would like to quote Andre Sobolevski’s words, an international independent expert with 28 years of experience in water treatment from heavy metals from the film “Amulsar. State of Indifference”;

“The solution is avoiding acid rock drainage. International practice is as follows: acid rock drainage is avoided in the mine projection period, not after mine’s operation. Otherwise, for hundreds of years huge amount of money will have to be spent to eliminate the consequences and this amount will several times exceed the income from the mine. In case of Amulsar we speak about 300 years of acid drainage. According to my calculations, 1-2 million dollars annually will be necessary for clean-up of these waters. We get 600-700 million USD counting from the date the mine operates.”

We would thus ask the Minister of Nature Protection to read about ecological consequences of contamination from this and other mines prior to mocking the warnings for mine project in Amulsar.

P.S. AEF expresses its gratitude to all supporters thanks to whom the research of acid drainage in Tandzut was possible to carry out.

The Issue of Teghut Mine Raised at the Danish Parliament, Yet Still Ignored in Armenia

Posted On 12th March 2018 ~ 0 Comments
Documents made available on the website of Danish parliament on March 2, 2018 inform that the representative of the leftist “Red-Green Alliance” party (Enhedslisten) Christian…