Back in 2015 AEF had alarmed about Kavart abandoned mine that pollutes the environment threatening also health of people in Kapan town and nearby residencies.

Despite our calls, state bodies took no measures and did not carry out any chemical analysis of yellow-reddish waters of Kavart stream that flows into Voghji river. Kapan’s mayor Ashot Hayrapetyan insisted that the municipality is not aware about Kavart mine area being dangerous and as such he sees no problems.

Therefore we decided to take samples from Kavart river on May 21, 2017. We specifically took samples from an area 970 m down the mine. The water sample was transferred to central analytical testing laboratory of RA NAS Ecological-Noosphere Studies Center (license No. 027/T-027).

The results of water sample analysis were shocking and confirmed our worst predictions. According to it hydrogen index in water, i.e. pH, which describes acidity of the solution, has surpassed the norm (7) turning into very acidic 3.22. This results in increase of concentrations of heavy and dangerous metals and some ions in the water.

As such, 6 out of 10 heavy metal concentrations exceeded the norms hundred times. These norms are set in the N 75-Ն decision of the RA government on “Setting standards for maintaining quality of the water in each area of water basin management based on characteristics of the location”, adopted on 27 January, 2011 for water in Voghji river basin.  According to this norm the waters from Voghji river basin are classified as 2nd category good quality. 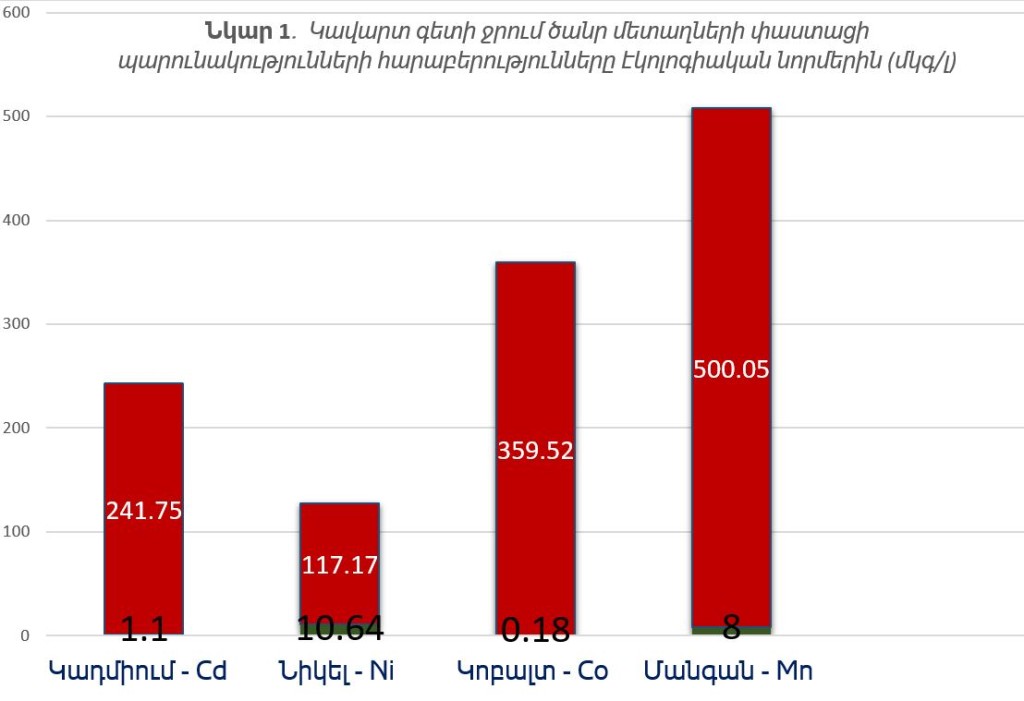 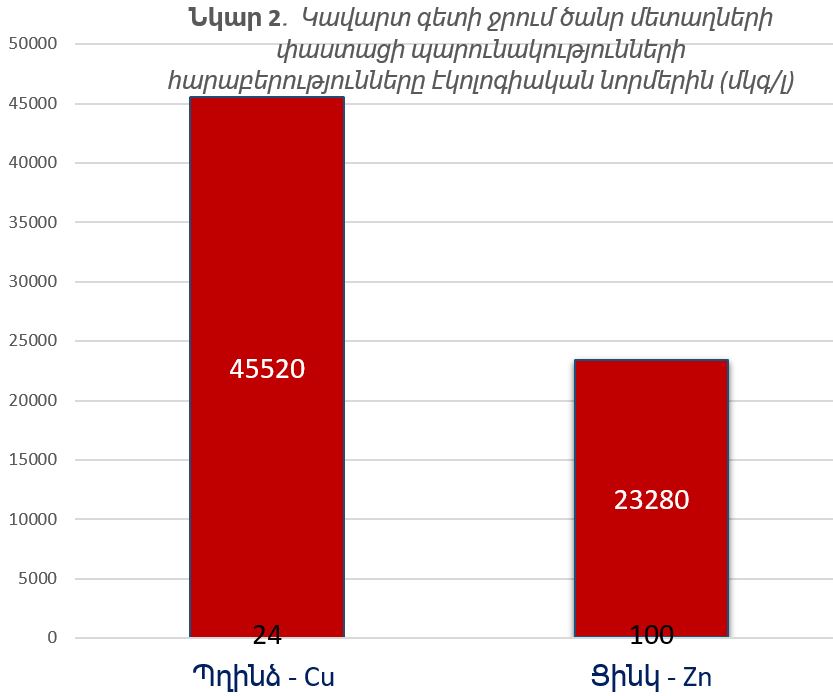 In the 2nd picture the scene is dramatic: copper concentration was 1897 times, zinc – 233 times exceeding the norm. Other 4 metals (arsenic, selenium, lead and chromium) were not exceeding the ecological norms.

The 3rd picture shows ion concentrations which are also exceeding the concentration standard for 2nd category good quality ecological norm. In case of two dissolved ions (sulphate – SO4 and chloride – Cl) the standard is exceeded 37 times. 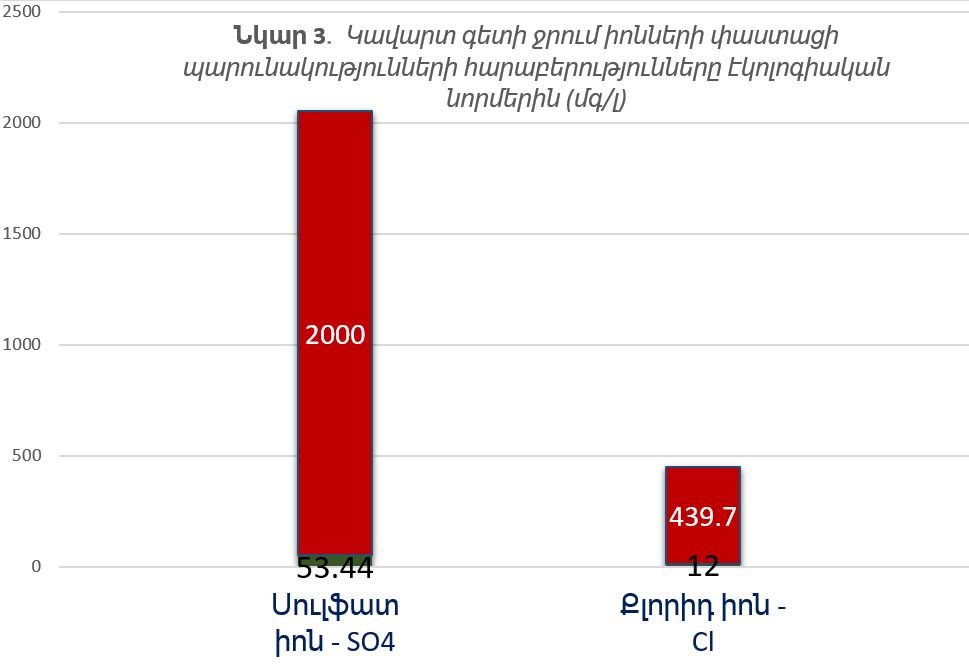 Water rigidity (Ca+Mg saline) was 56.48 mg eq./l which is 5.6 times exceeding the norm. Additionally, all the indexes presented in the pictures exceed the ecological norm for 5th category bad quality water set by the above mentioned decision of the RA government. 5th category bad quality pollution is the highest category and this type of water is forbidden for irrigation purposes. 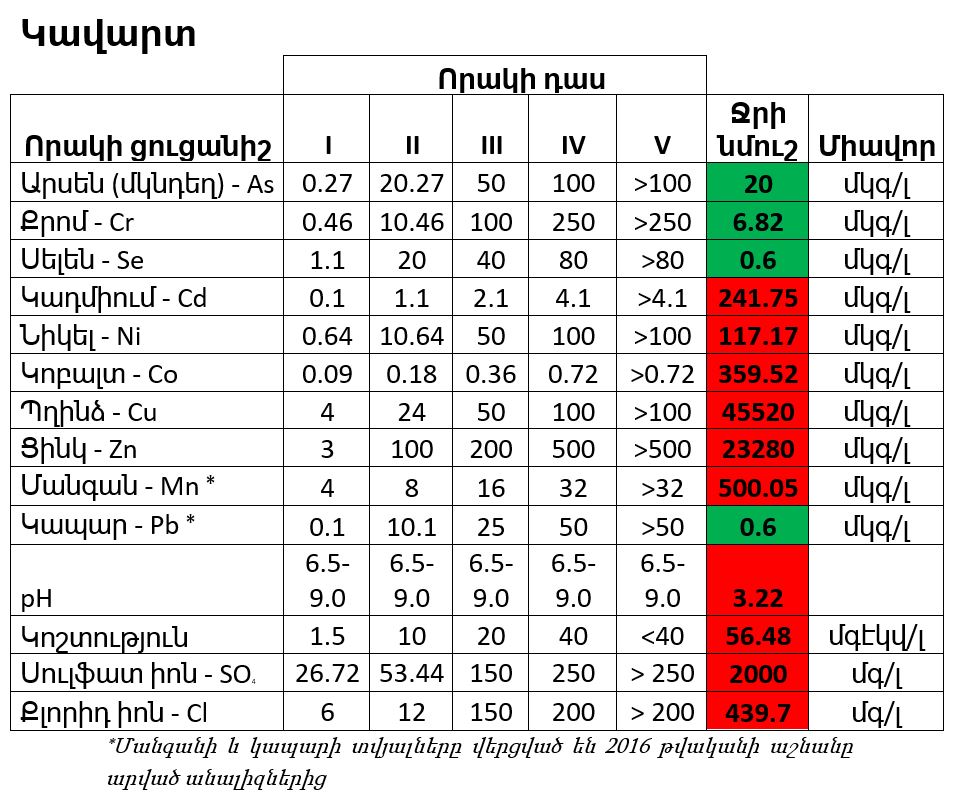 Heavy and dangerous metals and presence of other substances in huge amounts like in this case is obviously negative for the environment and humans. This type of contaminated environment is incompatible with biological life. The question is thus when the state bodies will realize the importance of ecological security and carry out evaluations of similar problems, prevent threats and neutralize the contaminating sources and polluted areas. These activities should be realized with money paid to the fund by metal mine operators.

Kavart mine area is not big and covers about 10 hectares. Meanwhile, there are metal mines in Armenia the cavities, waste rock dumps and tailings of which cover hundreds of hectares. Obviously contamination from these mines will be hundred times more than pollution from Kavart abandoned mine.

Acid rock drainage is also a real threat in case of gold mine in Amulsar. This mine contains high levels of sulphide with potential to generate acid, as well as other heavy and radioactive metals (lead, arsenic, chromium, sulfur, stibium, selenium, tellurium, cadmium, manganese, molybdenium, copper, iron, uranium, thorium, nickel, zinc, vanadium, zirconium, strontium, barium, bismuthum, borum, mercury). If we imagine the level of contamination in case of small mine in Kavart, we can imagine the threat of contamination in Jermuk’s mineral waters taking into consideration that in Amuslar 10 million tons of ore is planned to be extracted and processed, while the open pit mine, waste rock dump and cyanide heap leach facility will cover several hundred hectares.

Sadly, the RA government gave permission to this project without serious independent evaluation and hazard testing. If we do not prevent mine operation in Amulsar, we will have yet another acid rock drainage threat hanging over waters in Jermuk, Vorotan-Arpa tunnel, Spandaryan and Kechut water reservoirs, Sevan lake, river basins of Arpa and Vorotan. This in its turn will threaten water resources of entire Armenia and the region.

P.S. AEF expresses its gratitude to compatriots residing in the USA whose financial support enabled us to carry out this research.

Years of struggle succeeded! EBRD is no longer interested in Lydian

Posted On 16th August 2020 ~ 0 Comments
In July 2020, the European Bank for Reconstruction and Development made it known that it has divested from Lydian and its Amulsar project. EBRD had…

Open letter to the American University of Armenia: Your biased attitude towards mining issues casts doubt on your academic ethics and public responsibility

Posted On 17th October 2017 ~ 0 Comments
AUA President Mr. Der Kiureghian, Director of Acopian Center for the Environment Mr. Amirkhanian, students of the University, We read in the description of the…