As we are following any progress in Armenia that is particularly aimed at developing Armenia’s economy by creating sustainable alternatives such as green tourism, innovations in agriculture, etc, we’ve learned that the next goal of My Armenia Program funded by the USAID and implemented by Smithsonian Center, as well as AGBU Armenian Virtual College is the joint publication of an e-book to boost tourism and cultural preservation in Vayots Dzor region of Armenia. As we can see from AGBU’s press-release on the occasion of announcing the launch of the project, both sides expressed their commitment to support Armenia’s social-economic progress particularly by contributing to development of tourism and cultural heritage preservation.

“Tourism is one of the priority and dynamically developing sectors in Armenia. Committed to its mission of supporting Armenia’s socio-economic progress, AGBU is actively engaged in development and promotion of such innovative products that will contribute to the country’s efforts in positioning Armenia as a unique touristic destination attractive for people of all age groups and diverse interests,” said Vasken Yacoubian, AGBU Armenia President, during the ceremony.

“Through USAID and Smithsonian joint efforts, the “My Armenia” program will aim to demonstrate the productive relationship that can occur between culture and economic development. Enhanced and diversified cultural heritage tourism offerings developed by expertise and efforts of “My Armenia” in close cooperation with our key partners such as AGBU can drive sustainable economic growth to rural communities and support them in improving the sustainability of Armenian cultural heritage,” said Olivier Messmer, Chief of party of “My Armenia” Program. 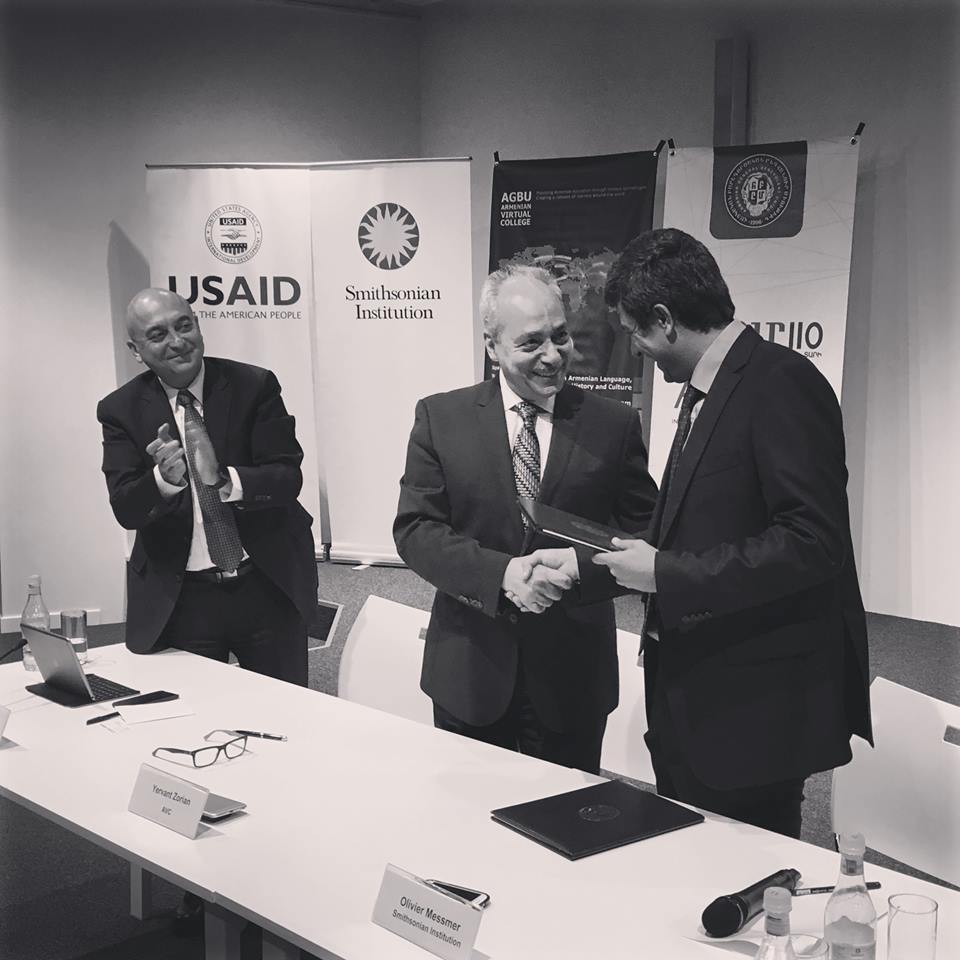 We as an environmental initiative in Armenia sincerely welcome and appreciate all your efforts to create sustainable paths for Armenia’s present and future prosperity. We are no less interested in the sustainability of Armenia. We constantly strive for having our efforts invested not only in protecting the environment, but also by being proactive in promoting for example clean agricultural practices. “Towards Eco-Community” was one such project through which several members of Lichk community were provided with beehives to produce honey, this way also creating income sources for the locals.

At the same time we cannot ignore projects ongoing in Armenia that sadly draw us back from the path of green and healthy present and future. One such threat is Amulsar gold mine in Vayots Dzor, a threat not only to Vayots Dzor region but to all Armenia, since Armenia’s drinking water resources are at stake. Therefore it comes as a surprise for us to see that you do not highlight the incompatibility of your cultural preservation and tourism program with mining. We cannot afford ignoring the fact that mining is one of the biggest obstacles that we face on the path towards sustainability. Mining has created sizeable obstacles for example for organic farming in many communities in the southern region of Armenia – Syunik. Similarly, in the north of the country the copper smelter of Alaverdi and the copper-molybdenum mine in Teghut (which started to operate only 2 years ago) have already contaminated the area so badly that the local farmers have immense difficulties selling their fruit and honey, and their lands and houses have lost much of their price. We believe, you are aware that similar or worse risks are awaiting Vayots Dzor if Amulsar gold mine project is implemented (you can read much more on this issue on our website); it is a threat for the nearby villages, for Jermuk health resort – a major health tourism destination in Armenia, as well as for all region of Vayots Dzor. Moreover, it is a risky project for our water resources, since here several rivers feeding Lake Sevan are formed.

Therefore, we would like to draw your attention to the abovementioned problems and ask you: what is your vision of tourism and sustainable development of Vayots Dzor, when a major mining project will be taking place there? Do you envision the combination of mining industry with tourism or are you ready to take an active stance for the preservation of the nature, lands and cultural heritage of Vayots Dzor? What steps do you undertake to bring forth the prioritization of sustainable branches of economy over practices that prevent Armenia from any green perspective? Do you meet and raise such questions with public officers or do you continue pushing forward your projects for ensuring Armenia’s sustainability without considering issues such as mining in Armenia (and in this case in Vayots Dzor)?

We look forward to your honest responses and thank you for your efforts towards building a more sustainable economy in Armenia.

Posted On 2nd March 2017 ~ 0 Comments
On the 16th of December 2016, Armenia’s Ministry of Nature Protection gave positive conclusion for the changes in the extraction project of Kajaran copper-molybdenum mine…

“The government of Armenia and its citizens should stop Amulsar mine”: international experts

Posted On 21st May 2018 ~ 0 Comments
Four internationally famous experts (from Australia, USA and Canada), with the help of American-Armenian Harut Bronozian, have been researching documents from Lydian International’s website since…