On October 12-13 2016 several representatives of Pan-Armenian Environmental Front (PAEF) civil initiative visited Jermuk, Gndevaz and Kechut in Vayots Dzor region. The purpose of the visit was to understand the locals’ position regarding Amulsar gold mine, as well as to distribute leaflets about the possible risks of the mine. During the visit to Jermuk, PAEF representatives also carried out a short activity holding a banner with “You mine, we die” sign in front of Jermuk’s most popular mineral water drinking site. As a result local and foreign tourists also learned about the possible risks in case of mine exploitation. 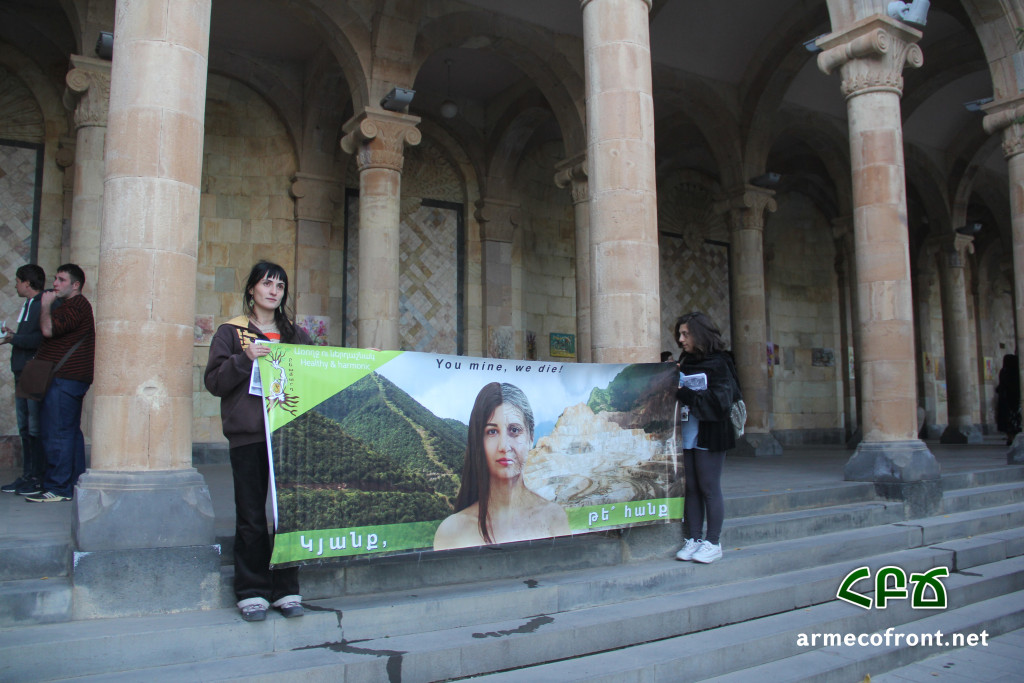 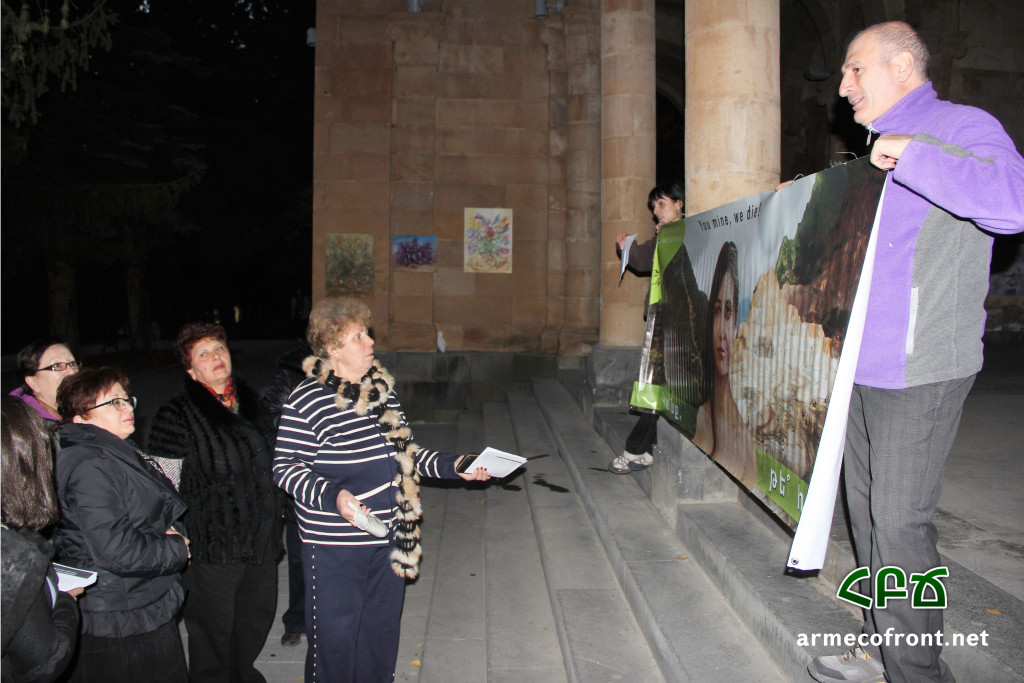 It was clear from the meetings that in all residencies people are concerned with mining exploitation and its negative impacts, yet the opportunity to work pushes many to think about short term gains planning to work, collect some money and then leave Armenia.

There are those who favour mining since the company exploiting the mine (Lydian) had spent money for example for renovating the school. Thus the head of this school not only supports the mine project, but also confesses that if children will be sick as a result of the mine, they will at least study in the renovated school.  Some others, like women we met in Kechut village (we met them in the small playground sponsored by Lydian) confessed they wouldn’t want to be in conflict with the heads of their community or Lydian, since they are the ones to live there and they wouldn’t want to be in constant conflict with them.

Despite most of the persons we met realized the risks of the mine, sadly enough they didn’t consider themselves as decision makers thus they surrendered to the idea of mining, hoping to at least have some monetary gains from the exploitation.

One woman realizing the perspectives awaiting for Jermuk – its shift from resort town to miners’ town – was already thinking of options of sending her granddaughters elsewhere, as she was concerned with the number of male workforce inflow to their town and the possible risky behaviours.

A short description of the communities we visited

Jermuk town is divided into two areas. One side is the most famous resort town with its beautiful landscapes, neat, clean streets and the less famous side of Jermuk, where majority of Jermuk’s population lives. In this area some of the streets are not even asphalted and when it is windy or cars are passing by, clouds of dust rise and sometimes it is impossible to breathe. One resident was telling that in buildings few neighbors have remained. Another person was complaining that workers lost their jobs in their branch of famous Jermuk mineral water company (according to her 300 persons have already been fired). 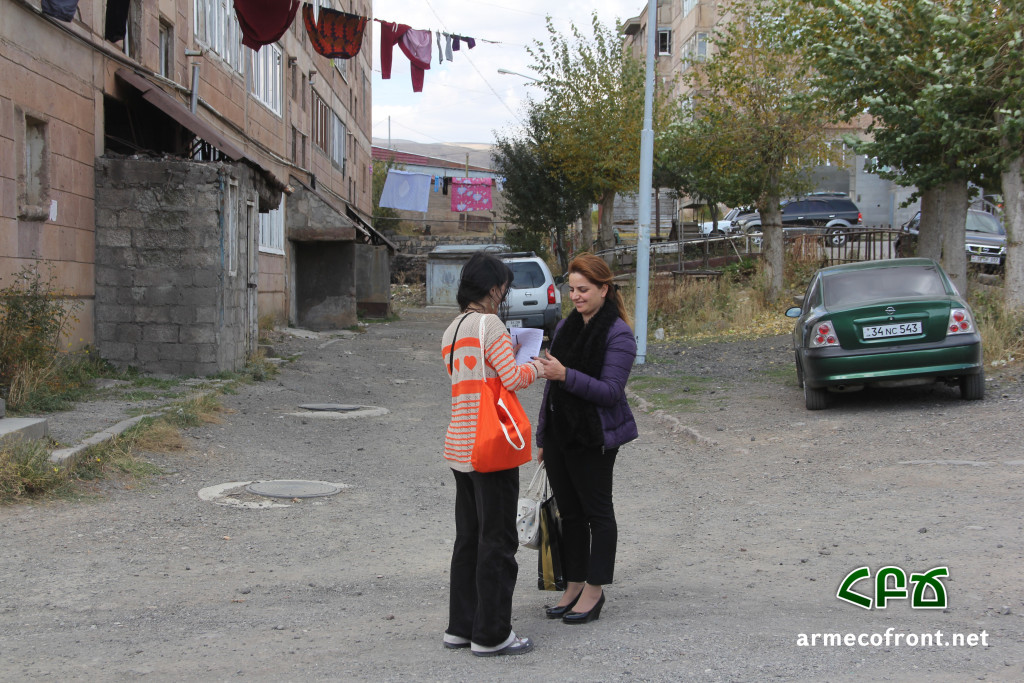 The socio-economic state of Kechut village was also not a good one. Here the roads were also not asphalted, houses were dilapidating. In Gndevaz village Lydian however had asphalted a few roads and posted a few signs informing about planned construction works here and there.

We were also told in Gndevaz that Lydian provides locals who have business ideas with up to 900 000 AMD. But the residents are of the opinion that most probably this is done not so much for promoting alternative economic activities but for neutralizing people’s complaints. After all Lydian itself understands that these projects won’t be realized, but instead many residents will use money for covering their loans or solving other urgent social issues.

Signs were also present on the road leading to the mine site marking the huge area. However the area is not yet fenced thus anyone can move here freely unless one meets the guards. It was unclear, however, based on which principles and laws these vast areas of meadows and lands were marked by Lydian, where according to the guards it is not permitted to enter or photograph. 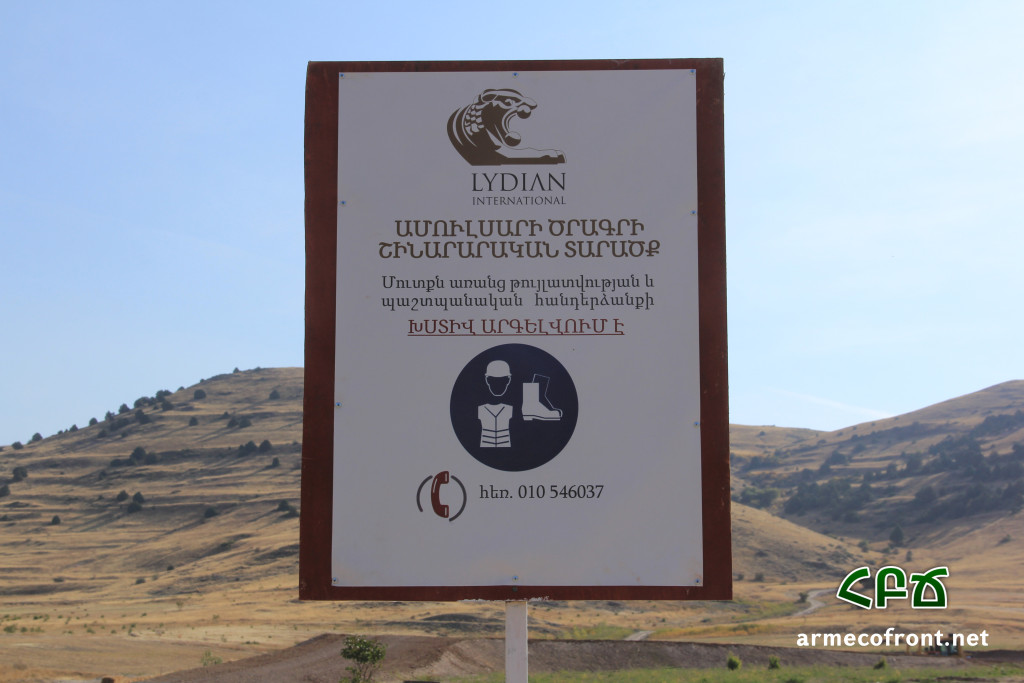 Many of the residents we met during our trip confessed that in case of mine exploitation they will work, collect money and leave Armenia. Thus, even if the government aims to create jobs by exploiting mines in order to stop the migration, in long term it poisons the environment and therefore pushes people to migrate.

However, some residents are forced to sell their lands not because they support the mine, but because they fear losing their property as a result of the government declaring “eminent domain”, a notion it had illegally used previously in many other cases. Besides, staying in Gndevaz is risky, since cyanide heap leach facility will be located only one kilometer from the village. Therefore, both the government and the mining company leave the locals with no option but to either migrate elsewhere or live in an unhealthy environment. Thus speaking of locals welcoming the mining project is nothing but a lie.

The government not only refrains from making long term programs for Armenia’s sustainable development, but it threatens the already existing alternatives, such as agricultural potential of Gndevaz and other nearby villages, depriving the locals from alternative opportunities to earn for their living.

Government also threatens Jermuk resort area. Indeed, the management of some of the sanatoriums and hotels complain that their hotels are empty for most of the year and busy only a few months. They also complain of social packages since sometimes the state doesn’t make payments for months for customers using these packages. However, it is not too difficult to imagine to what extent the resettlement of sanatoriums and hotels with miners would be promising for this touristic town.

“Jermuk World” health resort is already given to the company for miners’ residence. Some other resort centres are willing to rent half of their rooms hoping this way to compensate the absence of income during the rest of the year. However it is difficult to imagine the compatibility of mine and health resort, while preservation of Jermuk resort’s reputation during and after the mining will depend only from the careful calculations of the exploiting company. It’s another question, however, why the healthy future of Armenia should be left to the discretion of some British-Canadian-American cooperation.

As a reminder, Lydian International is an offshore company with little to no experience in mining that wants to exploit Amulsar gold mine. You can find description of the environmental and socio-economic risks of the mine in Armenian and English.

You can also be part of PAEF’s initiative aimed at stopping this threat to Armenia’s environmental security by signing and sharing PAEF’s petition “Stop Mining in Amulsar! Do not finance Lydian International!” launched in cooperation with 24 other organizations. You can also join PAEF’s other activities.

Statement by Amulsar Protectors regarding the Wildfire of July 30

Posted On 1st August 2018 ~ 0 Comments
On July 30th, a wildfire broke near Amulsar. At 16:10 we noticed smoke from behind the hills in front of Gndevaz village and suspected that…

Posted On 27th July 2017 ~ 0 Comments
For years Armenian scientists, specialists and environmentalists presented from their field of expertise the dangers of gold project in Amulsar planned by Lydian International. They…

Time for Armenia to choose: Mining for Development or Systematic Plunder?

Posted On 30th March 2015 ~ 0 Comments
It is indisputable that different aspects of the mountaintop mining industry, especially the production and processing of useful metal mining, cause irrevocable damage to nature…