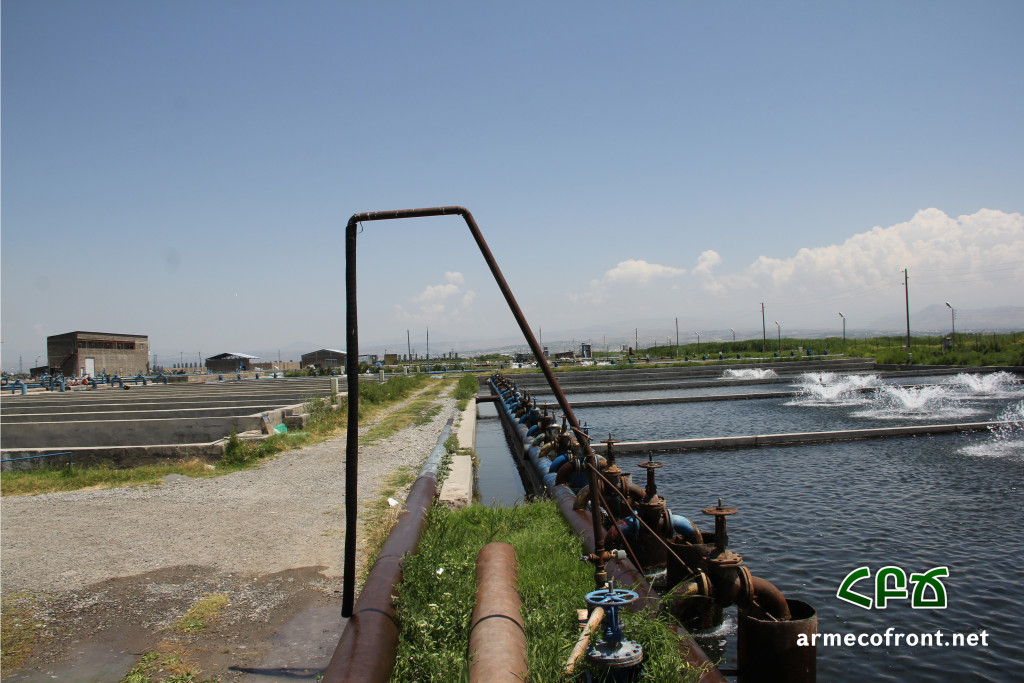 The waste of artesian waters extracted for fishery purposes in the Ararat Valley in recent years has left parts of the arable land without irrigation. On the other hand, water poured into drainage canals results in an increase of surface water and facilitates flooding and salination of other arable lands.

Gushing wells of the underground basin in Ararat Valley, which serve as the only source of water for many villages, have either partly or totally dried up in some places, because of a decrease in pressure caused by other wells dug in lowland areas.

Many villagers have lost the opportunity to irrigate their fields. A few profit from the trout farming industry.

The artesian basin – covering an area of 9,000 square kilometers at a depth of 80-180 meters – is comprised of three underground layers. Ground waters run on the upper layer; sweet drinking water (which is also ideal for fisheries) can be found in the second and third layers and is protected by waterproof layers of clay. Wells drilled in these two layers provide drinking, irrigation and technical water for Yerevan, Artashat, Armavir, Etchmiadzin communities and their neighborhoods.

This is a granary of natural water covered with layers of clay. Water here originates from the Ararat and Aragats Mountains as well as the Geghama and Armenian Taurus Chains.

About 180 gushing wells – either damaged or lacking valves – result in water waste. However, the major part of irrigation water is used for fishery.

“Imagine, the pressure [available] in a 16-storied building [suffices to] provide water to the last storey. But if the residents on the first floor leave the water running, then the pressure will decrease and the water will not reach the top storey any more,” says Vazgen Andreasyan, a hydrology expert with the European Union.

“The same is true with the Ararat Valley. Water flows out from the lowland wells. It results in a reduction in water pressure so that it does not reach the upland.”

The amount of water provided for Yerevan from 39 wells in the Gai-Haykashen system in 1981 was 190 billion liters. By 2005, it had declined to 154 billion liters.

“The artesian basin is self-renewable so there is no threat of it drying up.”

Andreasyan argues that, despite the basin’s renewability, its gushing capacity may decline through misuse. He refers to the example of a multi-storey building again, saying that even if the volume of water remains the same, a lack of running water may make the upper floors uninhabitable.

Several dozen wells have already dried up on the border zone of the valley. Hovtashat village in Ararat province extracted 5 cubic meters of water per second from its 86 spouting wells in 1989, but by last year the volume had halved.

This was a drop from 160 billion liters annually to 80 billion liters. Some wells with supposedly ‘self-renewable’ water supplies have been dry for three to five years already.

“The drying process started in 1990s, so now the consequences are being felt with every passing day,” Henzel Gharagyozyan from Hovtashat says.

“There is sufficient water for drinking, but we don’t have water for irrigation. It’s the third year already we don’t even think of having the second crop of the year.”

Part of the water sources in the village orchards dried up three years ago. Fields that used to give a rich crop have turned to desert. Gharagyozyan points to the dried up source and the bed of a former lake where he used to swim as a child.

The fish industries draining Hovtashat’s waters are half a kilometer away. Fisheries are an extremely profitable industry demanding very little investments – perhaps $2,000 in bribes for permission to get a well and $7,000 to drill and equip the well.

A significant number of fisheries belong to high-ranking public officials, so it is impossible to supervise them or prevent water misuse. Fisheries have been constructed in Gai, Aknashen, Haykashen, Apaga, Lusagyugh, Arax communities and Jrarat state breeding-ground in Armavir province as well as Hayanist, Hovtashat, Sayat-Nova, Sis and Ranchpar communities in Ararat province.

The State Statistical Agency says 152 tons of fresh fish have been exported from Armenia since 1999 and about 11 tons of live fish since 2000. An official in the statistical agency said counting the amount of fish produced in the Ararat Valley is impossible.

Live fish – mainly trout – from the Ararat Valley sell for 1,500-3,000 drams per kilogram in Yerevan stores. Artesian waters are cold enough to breed trout; besides, they are clean, flowing and do not need filtration.

The old wells were drilled 100-110 meters deep; those for fisheries are 150-180 meters deep. This results in a decline in water pressure and quality.

Specialists say the resources are simply being mistreated since a managed circulation system could ensure re-use of water up to five times if proper investments were made. The fisheries use the water only once then pour it carelessly into the River Arax and drainage canals, causing problems.

While part of the fields lack irrigation because of the fish industry, another becomes over-watered and even swampy. Fisheries pour their used water into the drainage system, causing an increase in water levels and flooding and salination of arable lands and orchards.

The drainage system is a thousand kilometer-long artificial canal built between the 1940s and 1960s as a measure to drain the Ararat valley swamps and prevent malaria and salination of arable lands. The system was intended to remove excess water from the valley.

The drainage system helped prevent malaria. It re-emerged 30 years later, in the post-Soviet period, as the drainage system became choked through lack of maintenance. This resulted in increased water levels and the return of swamps.

Malaria receded in 1997 when the government initiated a clean-up to restore the drainage system to normal operations with financial aid from the European Union. At present, 40 per cent of water in the drainage system comes from fisheries: it increases the total amount of water and hinders effective operation of the network, reviving the threat of malaria.

“It hinders salinated water from arable lands to pour into the system. That is, one water hinders the other, resulting in over-hydration and salination of the land,” says Georgi Chobanyan, deputy director of ‘Melioration’ (quality control) company.

Andreasyan uses his example of the 16-storey building again to describe the situation. He says: “The stories above the fourth floor are empty because no water reaches there. The stories below the second are also uninhabitable because the residents of the third floor leave the water running for so long that it pours onto the floors below all the time.”

“Isn’t it ridiculous to cripple a whole building because of the lifestyle of the residents of just one floor?”

He says that the Armenian government has paid too little attention to the strategic importance of water resources. Its proof, he believes, is the misuse of the artesian basin, which, if used effectively, will exceed the renewable resources of the Lake Sevan.

Andreasyan says if new wells are drilled, the level of artesian waters will drop to dangerous (or even irretrievable) level, as happened in the 19th century in Paris neighborhoods.

“It’s a pity people in the 21st century can’t learn from past mistakes,” he says.

Posted On 3rd September 2016 ~ 0 Comments
There are around 173 small hydropower plants (SHPP) in Armenia, of which around 114 are on natural streams. The license for these SHPPs is given…

Adopt a village and get involved!

Posted On 15th October 2014 ~ 0 Comments
In May of 2014, 42 beehives were distributed to the Lichk community located in the Syunik Region through the project known as “Towards Eco-Community”. This…

Posted On 27th July 2017 ~ 0 Comments
For years Armenian scientists, specialists and environmentalists presented from their field of expertise the dangers of gold project in Amulsar planned by Lydian International. They…