Open letter to the American University of Armenia: Your biased attitude towards mining issues casts doubt on your academic ethics and public responsibility

We read in the description of the Facebook event announced by Acopian Center for the Environment that AUA, in partnership with Lydian International offshore mining company, is organising a public talk of an employee of a foreign mining corporation who, it turns out, is also a former colleague of the vice-president of Lydian’s Department for Sustainable Development. Previously, your University’s cooperation with mining businesses was not so apparent, while now it has become completely obvious. We believe that this kind of partnership deprives the University of its academic reputation – an institution that acts for in the interests of science and the public. Let us point out that environmental conservation and public interest are unalienable. Education, when it does not serve public interests, it then serves private profit solely ; is so, AUA should make its position clear to the public. 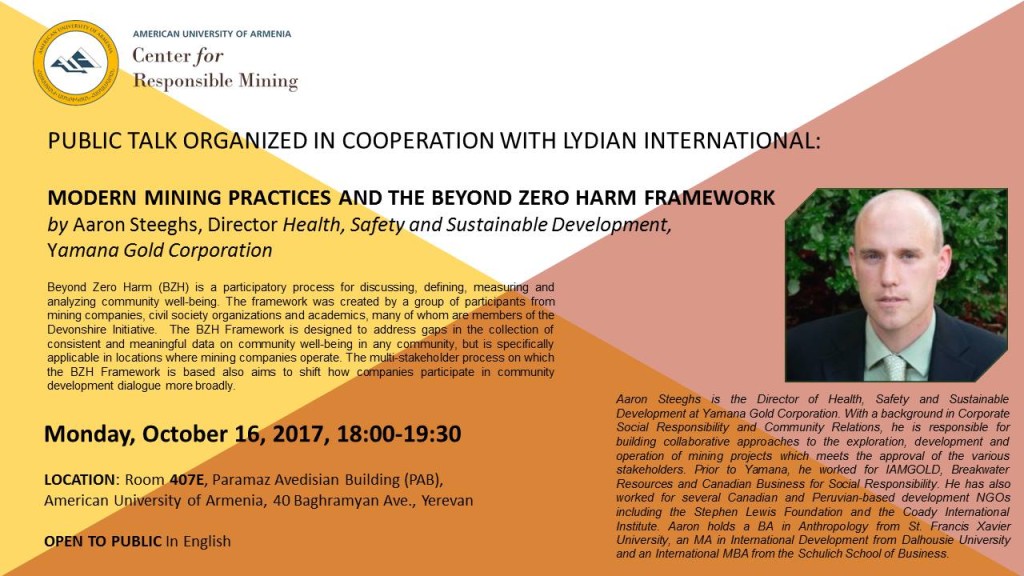 The topic of the event is related neither to natural sciences, nor to social sciences, even though AUA might try to justify it with the slick argument of “promoting academic discussion on mining issues”. This event is about public relations, misleading communities, and the babble called “corporate responsibility”; in reality, it only serves to improve Lydian’s suspicious reputation through the American University of Armenia and contributes to whitewashing the vast academic criticism of the shortcomings of the environmental impact (especially the negative impact on water resources) of gold-mining in Alumsar. This kind of a meeting should rather be organised by Lydian in its own premises. Indeed, mining companies would be interested in replenishing their resources with new knowledge about a prattle called “Beyond Zero Harm”.

We strongly condemn AUA’s partnership with any mining company or with quasi-academic-educational institutions associated with mining companies (we do remember that AUA’s past invitations of representatives of different centers acting in Canadian and Australian universities and funded by mining corporations).

We call upon the students of AUA, and particularly those of Acopian Center for the Environment, to claim for active participation in the activities and decision-making of the university, to present their academic and public stances, to protect their professional spheres from appropriation my the private sector, to politicize the actions of the university’s administration and faculty, as well as to bring the issue of their university’s declining reputation to wide discussions.

About gold mine project in Amulsar presented by Lydian International

Posted On 12th January 2018 ~ 0 Comments
It is no news that on December 24, 2017, international independent experts declined the invitation of Armenia’s Minister of Nature Protection Artsvik Minasyan to participate…

Posted On 2nd March 2017 ~ 0 Comments
On the 16th of December 2016, Armenia’s Ministry of Nature Protection gave positive conclusion for the changes in the extraction project of Kajaran copper-molybdenum mine…

February 16, Court Hearing Around the Claim to Cancel Amulsar Gold Mine Project. AEF

Posted On 15th February 2017 ~ 0 Comments
Since April 2015, many residents of Gndevaz community of Vayots Dzor marz and two environmental NGOs have been litigating the permits given by the RA…