War is an extreme form of human and ecological catastrophe violating the right to life for humans and other species. Like war, mining is catastrophic to humans and to life-sustaining ecological systems. Thus, it is ironic and morally alarming that mining corporations in Armenia are taking advantage of the current war (waged by Azerbaijan and Turkey against Armenia and Nagorno Karabakh) in order to manipulate public opinion in their favor.

Recently, mining corporations have shown off their donations to the All Armenia Fund (mobilizing humanitarian relief), thereby exploiting the topic of war to promote their business interests and boast their “civic” legitimacy. The social irony remains that despite alleged donations to the All Armenia Fund from multi-million dollar mining companies, the largest contribution of funds has come from Armenia’s working class.

Additionally, mining companies are posting photos of employees and individuals substantially or minimally associated with them who happen to be fighting on the frontline or who have been killed in the war. This is an attempt by them to gain credit for the price these people have paid to their homeland by their own lives.

Even if Zangezur Copper and Molybdenum Combine (ZCMC), Teghut CJSC, Chaarat, GeoPromining Gold and other mining companies donated a billion dollars each to the cause of relief from war, this would not change the social and economic consequences of the ecological catastrophes they have created and will continue to create across Armenia. Neither would their petty donations remedy the toxicity they have imposed on the lives of local people and species. Such donations don’t change the fact that ZCMC, for example, has illegally extracted millions of tons of extra ore while leaking millions of tons of mining waste into the Voghji River with no legal and financial ramifications beyond a cheap $300-400 fine issued by the government.

Despite the fact that these representatives of “borderless,” multinational capital try to place themselves within the cultural and ideological expressions of a nation-state by taking part in the “us versus enemies” discourse (“enemies” often being people protesting against their destructive profiteering), there are realities that unveil their vulturous and double-faced nature. Allow us to name a few of these realities: the Russian VTB bank which seized Teghut after it went bankrupt is co-owned by Aliyev; Lydian which has an eye on Amulsar has been attracting and receiving capital investments from Turkey; Russian oligarchs keep and multiply the profits made from the Armenian mines in the banks of war-loving empires.

Bragging its “beneficial engagement” in the current war, the infamous Lydian corporation creates illusions and boasts that some of their mining technology (which was supposed to have already been returned to creditors) is being used on the battlefield, however we have no credible proof that it is indeed being used or whether the use of such technology is credited to Lydian at all. Lydian’s statements about the recent arms sales restrictions to Turkey set by the government of Canada sound as if this notorious company only recently incorporated in Canada due to bankruptcy in offshore Jersey is taking credit for the actions of the Canadian government.

Nonetheless, all of these PR tactics do not change the fact that gold mining in Amulsar is absolutely unacceptable, that for years this company has abused the will of the locals living in the communities of Jermuk, Gndevaz and all the way downstream in Arpa river’s valley. These PR actions indeed do not change the fact that this company pushed through its project with flawed and incorrect Environmental Impact Assessment (EIA) documents.

Ultimately, Lydian is attempting to harness public appeal by unethically exploiting the Armenian people who are burdened by psychological and emotional traumas of war. They do so by discrediting local people who are fighting against mining at Amulsar, unleashing yet another wave of hatred and animosity against them through its official social media channels and affiliated propaganda pages.

Readers are welcome to judge for themselves the kind of PR this company is engaging in (translation and highlights by us).


“We are sure that everyone’s attention is focused on the situation in our country, and everyone’s efforts and capacities, including ours and our employees’, are directed towards strengthening the homefront of our boys and supporting them. Despite that, we also have to respond that the news spread by some activists claiming that Lydian is moving equipment at Amulsar, is nothing but a “sabotage”. It is hard to believe that in these difficult days for the country, some keep on carrying out orders against Lydian. Even on these days. A sabotage, a military feint that has been carried out by activists against the economy and state on a consistent basis for two years. Working at Amulsar and reinforcing the homefront is our right and duty, especially on these days. We consider it irrelevant to state for what purpose Lydian’s equipment has been used and continues to be used, because there are things more important than personal or corporate profit. Only time will show who was carrying out a “sabotage” against the state, the country, the economy, and for what reason.

We express our solidarity with Lydian’s employees who have been drafted to the army, numerous community members, the soldiers on the frontline. #Wewillwin and #Wewillbuild strong economy for our country together.” 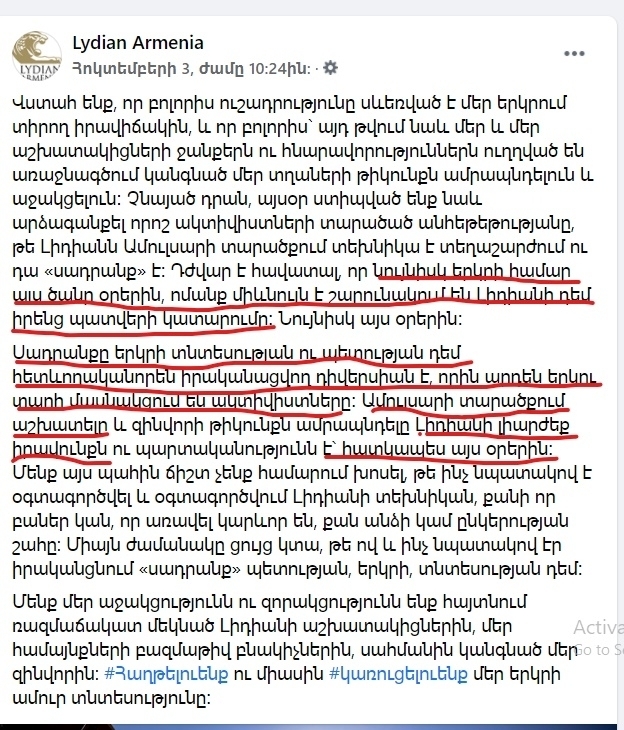 Here is another piece from a fake FB page supporting Lydian, most probably run by its employees, as was the case with the fake FB user “Vahagn Hovhannisyan” which turned out to be run by Lydian employee Hovsep Asoyan, as established by court.

ՖեյսTube
October 12, 2020
“Know in the face those that destroy the country from within.
While the boys are heroically keeping the real posts on the battlefield, these people have built internal barricades and posts within the country by destroying the economy.”

Deeply disheartened by the war, we do not find it ethical to take actions to clear the reputation of victims of this filthy act of discrediting, to show where exactly they are now, whether or not we have news about their whereabouts from the battlefield. We simply cannot respond to immoral tactics with the same method.

However, we are enraged by the dirty PR actions of the representatives of big capital. We, therefore, declare that cognizant people will not tolerate them. Whether a war or extractivism, both are human and ecological catastrophes and one does not clear the other, does not make the other better.

We know too well that the reasons of wars lie not only in the ambitions of dictators and politicians, but also in the interests of big capital. It is difficult to find a more profitable business than war – destroyed infrastructure to be rebuilt; new arms to be purchased; emotional shock not to be overcome by people for a long time during which utmost heinous business projects can be advanced. These will even more severely augment human suffering and destruction of the environment.

We know too well that extractivism is not a sustainable economic activity, it is short-lived which exists at the expense of the other sustainable economic activities. After extraction, human settlements are emptied, while in Armenia most of the mines are located in the bordering areas. We know too well that the local market for mining is nothing, so what will happen if one day, a blockade of the country or border closure occurs or if the paid taxes drop even more due to metal price fluctuations?

We see very well how the frantic euphoria of the war is targeting infrastructure that can lead to ecological disasters. Official statements have already been released that Artsvanik tailing dam of ZCMC has been targeted twice. Artsvanik is the largest dam containing mining waste in this entire region, one of the largest in the world.

What if the infamous cyanide heap-leaching facility of Amulsar gold mine was already built in Vayots Dzor?

We hope that people will be so rational that they will not add other catastrophes to the existing huge destruction and death the consequences of which will make this part of Planet Earth completely unlivable for generations to come. We find conversations about blasting Mingechavir water dam in Azerbaijan, or targeting Metsamor Nuclear Power Plant in Armenia, or Khoda Afari water dam in Iran equally unacceptable that can deepen the existing ecological catastrophe.

It is a matter of speculation how many thousands of living species have been deprived of life, habitat and families along the painful human losses. Our region was boasting of its unique and rich biodiversity. Environmentalists from around the world were following a single family of the endangered species of leopards moving from Iran to the mountains in Armenia and Caucasus. We have been fighting for every single endangered plant and animal species because we have been aware that especially in this era of global climate changes all our lives are interlinked. Some of us have also been acknowledging that from the perspective of deep ethics, as human species, we have colonized and exploited Planet Earth and its other inhabitants in a cruel manner, and therefore have a duty to stop this.

Concluding on extractivism and the ambitions of mining companies, we believe that restoration of nature, conservation of biodiversity and flourishing of agriculture need to be deeply evaluated, especially now. The lessons of today must lead us to an understanding that extracted mines or even the water for that matter located on the land defended by arms do not belong to those that defend the lands; their profits almost entirely flow into the pockets of local and international capitalists. Therefore, nationalisation of public wealth and its reasonable use must become an imperative after legal ramifications are taken into account (bilateral investment agreements etc).

The current crisis tells us that we need to move in the direction of strengthening environmental and labor norms, and we need to exclude construction of potentially disastrous infrastructure, not the other way around.

Posted On 26th March 2019 ~ 0 Comments
All around the world we witness mining companies targeting citizens for fighting for the protection of nature. Armenia is in no exception. For years paid…

The national security of Armenia is under threat: sulphuric acid, being formed in Amulsar, will be extremely dangerous. SOS

Posted On 31st July 2017 ~ 0 Comments
"The gold mine will become a huge sulfuric acid generating generator, once the covered layers are removed" - Dr. Armen Saghatelyan Public concerns and alarms…