On the 16th of December 2016, Armenia’s Ministry of Nature Protection gave positive conclusion for the changes in the extraction project of Kajaran copper-molybdenum mine operated by “Zangezur copper-molybdenum Combine” CJSC (ZCMC). Negative outcomes for the ecology are obvious in the updated and confirmed project. However, today we would like to pay attention to another aspect that exposes the formality of conclusions and permissions given by the state bodies and complete absence of control in this sphere.

According to the positive conclusion given by the Ministry, the company will be permitted to extract up to 22 million tons of ore from Kajaran mine instead of 12.5 million permitted currently. The right to extract ore up to 12.5 million tons annually as well as the positive conclusion was given to ZCMC back in 2007, which has not changed in the past 10 years. This means that the company operating the mine has had no right to extract more ore than the volume permitted by the authorized state bodies.

However, based on the information provided by the state bodies in response to Armenian Environmental Front (AEF) civil initiative’s inquiry, it turned out that starting from 2010 ZCMC illegally increased its extraction volumes, while during the past five years it extracted up to 17-19 million tons annually (see infographics). 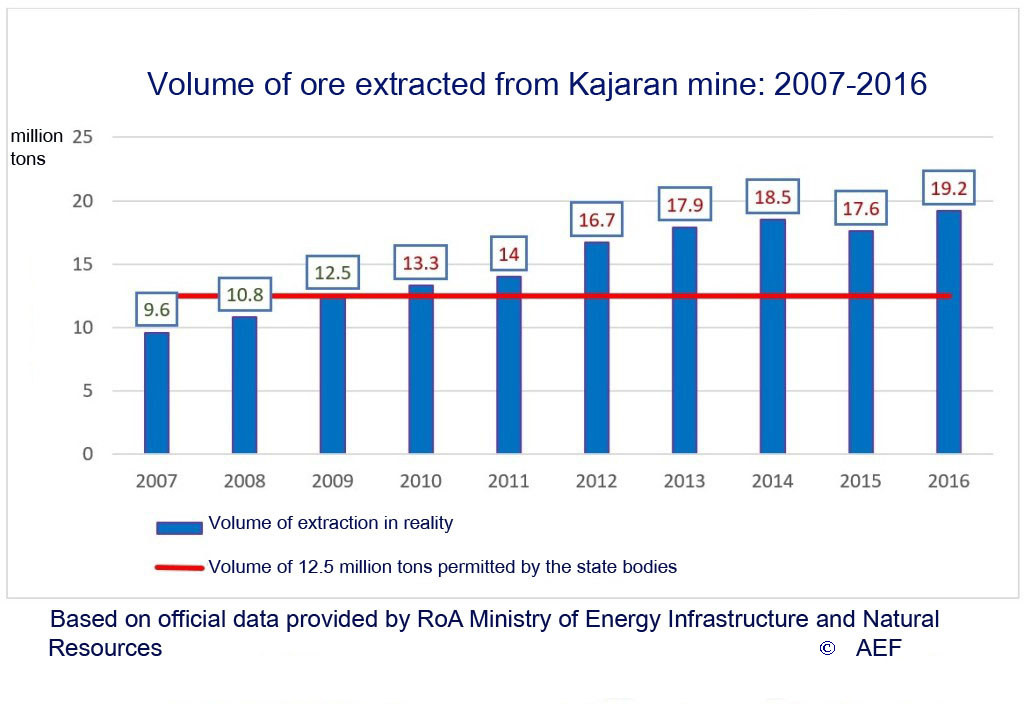 Thus during the past 7 years ZCMC extracted and processed 29.7 million tons more ore than permitted as a result of which same amount of additional ore wastes were dumped into Artsvanik tailing, thus increasing the volume of environmental pollution. Naturally, the volumes of waste rock dumps, different reagents used in flotation, various emissions into air and water have thus correspondingly increased.

This is a stark violation of the RA Law “On the Environmental Impact Assessment and Expertise” that was acting as of August 9, 2014. Point 6 of article 11 of this law states that “If the conditions of the expertise conclusion is violated during the realization of planned activities, the authorized body must partially or fully close, halt or prohibit realization of the planned activities until conditions are in place for expertise conclusion”. However, the requirement of the point 2, article 21 of the new RA law “On Environmental Impact Assessment and Expertise” was not followed as well. It states that “Positive expertise conclusion has no force, if the activities are carried out with deviations from the requirements of the project document with expert assessments and expertise conclusions”.

Additionally, ZCMC violated the requirement of the sub-point 1, point 3 of article 59 of the Code “On Natural Resources of RA” which states that “The person who received permission to extract natural resources is obliged to carry out activities according to the contract on extracting the natural resource and conditions of the project”.

These violations have been so obvious that they could not go unnoticed by the Ministry of Nature Protection and Ministry of Energy Infrastructure and Natural Resources. While noticing such violations and taking no steps means it is useless to speak about more serious risks and violations that are occurring all over the mining sector in Armenia. State environmental expertise becomes useless too. Not only expert assessment is not carried out in terms of ecological and health risks, but also no control is implemented over the simple conditions included in the positive conclusions given to the mine operator. Speaking about giving permissions for new metal mines’ exploitation is thus nonsense in such absurd governing environment.

Still, it would be interesting to receive clarifications from the authorized state bodies, as well as from the heads of the company operating the mine and German CRONIMET Mining that is a 60 percent shareholder of the ZCMC CJSC. It’s interesting if this German company would treat the laws and the environment in Germany the same way as it does in Armenia.

P.S. In recent years there were numerous alarm calls that ZCMC is violating conditions of contract on natural resource use set by expertise conclusion. Back in 2014 AEF wrote an official letter to the Ministry of Nature Protection, where among other problems it highlighted the facts of excess ore extraction at Kajaran mine. Instead of implementing the conditions of law, the Ministry replied that ZCMC is preparing documents for receiving the permission to extract 22 million tons annually and it will soon present the documents for environmental impact assessment. There were also numerous alarm calls on polluting the environment (in Armenian here and here).

Below is the official response and its English translation. 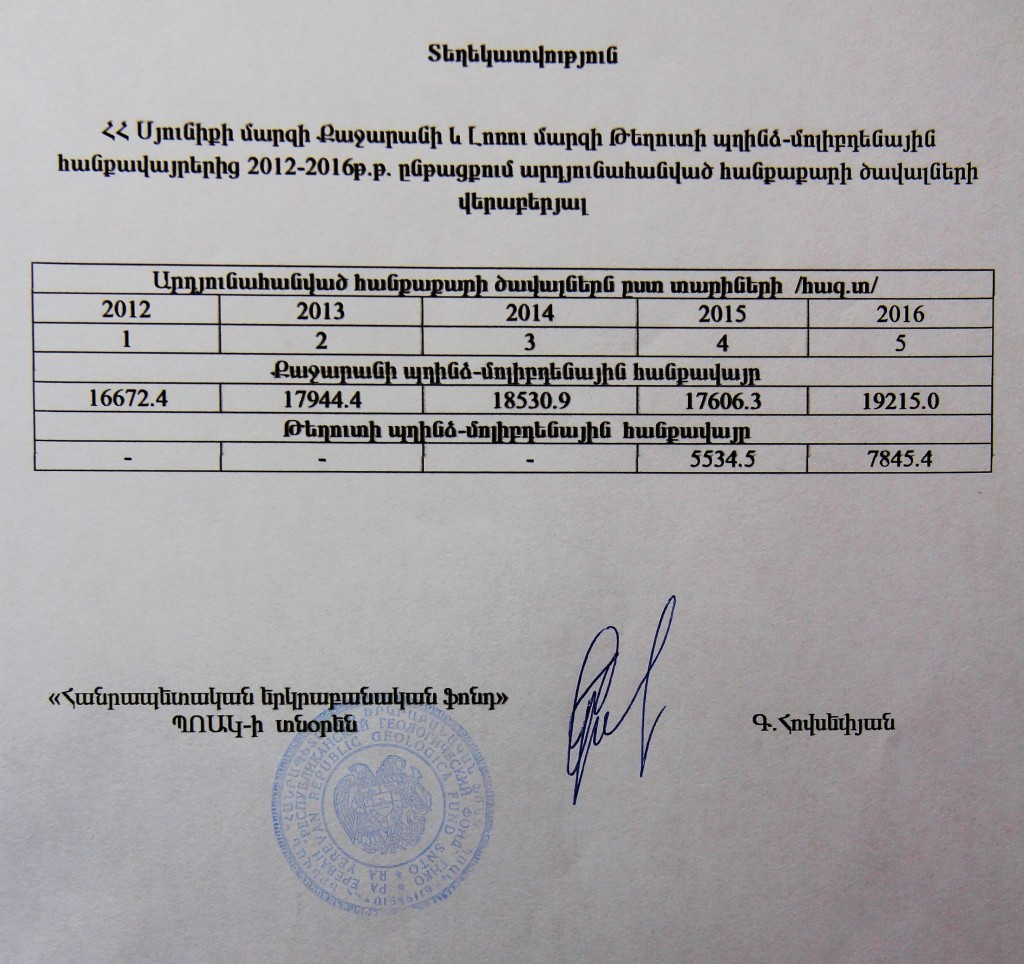 Information on the volume of ore extracted between 2012-2016 in copper-molybdenum mines in Kajaran, Syunik province and Teghut, Lori province of Armenia

A Petition has Started on Change.org against the Gold Mine Exploitation in Amulsar (with updates)

Posted On 3rd October 2016 ~ 0 Comments
Together with local and international organizations Pan-Armenian Environmental Front (PAEF) civil initiative has started a petition on change.org with the demand to stop gold mine exploitation…