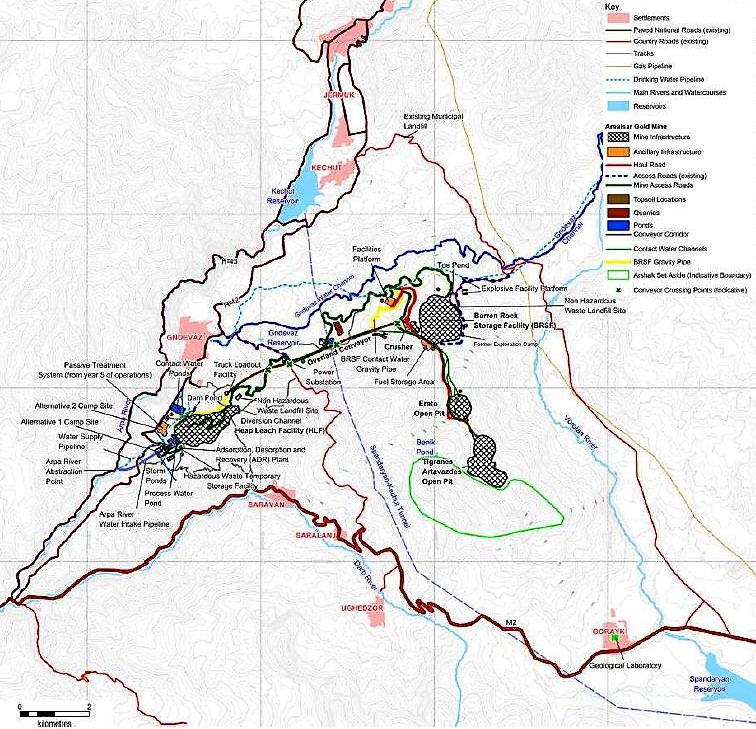 For years Armenian scientists, specialists and environmentalists presented from their field of expertise the dangers of gold project in Amulsar planned by Lydian International. They insisted that this project should not be realized.  Many times it was mentioned that researches and assessments presented by this inexperienced offshore company stating that all possible risks are manageable not only pose doubts, but also they do not correspond to the reality. It was also mentioned that Armenia’s government did not carry out its own expertise and instead it relied on Lydian’s assumptions written in the documents neglecting all other objections and justifications brought by independent experts.

Now international acclaimed experts in the field have also joined Armenian experts and based on the proposal of the US-based Harout Bronozian, they presented results of three different expertises on this gold project. The results of these researches once again confirm the statement voiced for many years that gold project in Amulsar should not be launched since the assessment carried out by Lydian are extremely incomplete, while the government is basically uninformed about the unmanageable risks posed to our water resources.

The first one of these researches is by “Blue Minerals Consultancy” company about “Evaluation of Lydian Amulsar Gold Mining Project: Assessment of Acid Rock Drainage Potential and Effects on Surface Water and Groundwater”. It was prepared by the principals of the company Dr. Andrea Gerson and Dr. Roger Smart based on the study of more than dozen of documents found on Lydian International’s official website. These experts have combined experience of 45 years in minerals processing and acid rock drainage scientific research and development. The abovementioned research is 125 pages and its English version can be found here, while the summary is here.

We would like to draw attention particularly of the decision makers in Armenia, as well as the shareholders and creditors of offshore Lydian to the main conclusions of the research.

In the foreword, the Australian scientists mention that acid rock drainage (ARD) is internationally the biggest environmental issue facing closed and abandoned mines and mine site rehabilitation. It presents an impending liability to current and future mining operations worldwide and also poses a challenge to the environmental and social acceptance of mining activities. Total cost estimates for remediating ARD-impacted sites in the USA and Canada combined runs into tens of billions of dollars.

Besides, ARD can continue for hundreds of years after a mine is closed and so has potentially long-term and serious environmental impact on downstream water quality, agriculture, fauna and flora. Acidic drainage with associated dissolved metal species some damaging to human health and toxic to biota (e.g. Cd, Cu, Pb, Zn, As, Hg, Se) can result from the weathering of sulfide minerals in mine waste rock and process tailings. The iron sulfide mineral pyrite (FeS2), found throughout the Amulsar deposit, is the main generator of acid drainage.

For effective ARD control and mitigation the rates of release of acid must be understood in advance. But it is only through understanding the evolution of the rate of acid release that an effective and long-lasting environmental management plan can be put in place. This has not been done adequately in the Amulsar ARD planning.

The main questions and conclusions of the experts are as follows:

Later the Australian scientists enumerate researches that are absent from Lydian’s documents.

Later it is mentioned that “there is a lack of understanding of the rates and amounts of ARD release from this mine site with potentially serious downstream consequences. Without proper definition it is not possible to ensure that adequate mitigation is in place to ensure minimal impact on the environment and human endeavors including potable water, agriculture and tourism. All of the missing tests and data specified [in the abovementioned 5 points] should be obtained before proceeding with ARD planning.”

Additionally the independent experts studied “Resources and Reserves of Armenia” section of Amulsar NI 43-101 refined technical report by Samuels Engineering prepared on March 30, 2017 on the order of Lydian company. These sections are about ARD description, mitigation and management. The recommendations in Chapter 26 show the incompleteness of this characterization and detailed planning.

“Unlike active treatment systems, a Passive Treatment System (PTS) must be designed to function under site-specific conditions. To date, no studies have been performed to ascertain the performance of PTS methods on Amulsar ARD. A process verification study must be performed. This study includes bench scale and pilot-scale tests. The process verification studies are long-duration tests that will start during final design and continue into production.” This is not acceptable. This should be complete before production. Changes after production have carry-over consequences for ARD control.

The mine should not have been approved until these tasks and verification were complete. The detailed ARD assessment and control design has not been done. Finding out after starting the mine that very high cost on-going treatments are required may seriously alter the value to shareholders and the Armenian Government.

Blue Minerals Consultancy suggests as a result of their research not to start the mining before these omissions are not properly studied by independent bodies/advisors, and after the omissions will be inserted in the ARD management plan, which will also include the government’s and company’s responsibilities and liabilities (the full summary of the research can be found here).

These serious researches once again irrefutably prove that Lydian Armenia/International have released information to the public regarding gold project in Amulsar which is misleading, incomplete, hide even the important results of the research ordered by themselves. At the same time Armenia’s government continues to cite this company and the information provided by it when concerned citizens send inquiries to the government for clarifying data or expertise. It turns out that a private organization is able to keep our whole community misinformed, when the situation is more than worrying, the terrible disaster is concealed, and the critique of concealment is not properly discussed either.

Responsibility for this concealment lies on dividend holders or financiers of the project (especially Armenians), Armenian scientific community, acting according to Lydian’s request, international organizations, that pressures local authorities (World Bank, EBRD etc.), also foreign embassies, namely US and UK. Also, a huge responsibility lies on press, that again, forgot its own mission and acts according to Lydian’s orders, and most importantly – Armenian government, that subordinates environmental safety, public interest and its accountability towards the community to private interests.


Therefore mine exploitation in Amulsar is impossible in current strategic needs of Armenia, particularly from the perspective of priorities such as protection of water resources and the livelihoods of the population. If informed about real danger of Amulsar, the most of the population, including people living in the immediate affected regions, will start a powerful resistance.

Posted On 18th June 2017 ~ 0 Comments
Acid rock drainage in mines is a serious and unmanageable ecological problem, which inevitably occurs in all sulphide metal mines during the operation and can…

Posted On 9th December 2017 ~ 0 Comments
On December 12 at 10:45 am - 14:00 an environmental meeting will be held, during which industry experts and environmentalists will examine the issues that…

Posted On 5th April 2019 ~ 0 Comments
A new movement is growing in the world aimed at demolishing dams over the rivers. The movement is known by its name “International Rivers” and…