On August 4, 2017 a number of environmental organizations submitted a letter to RA Prime Minister Karen Karapetyan and Minister of Environmental Protection Artsvik Minasyan presenting the recent reports and conclusions by international independent experts. The letter also includes legal grounds for annulling the positive conclusions given to this destructive project. 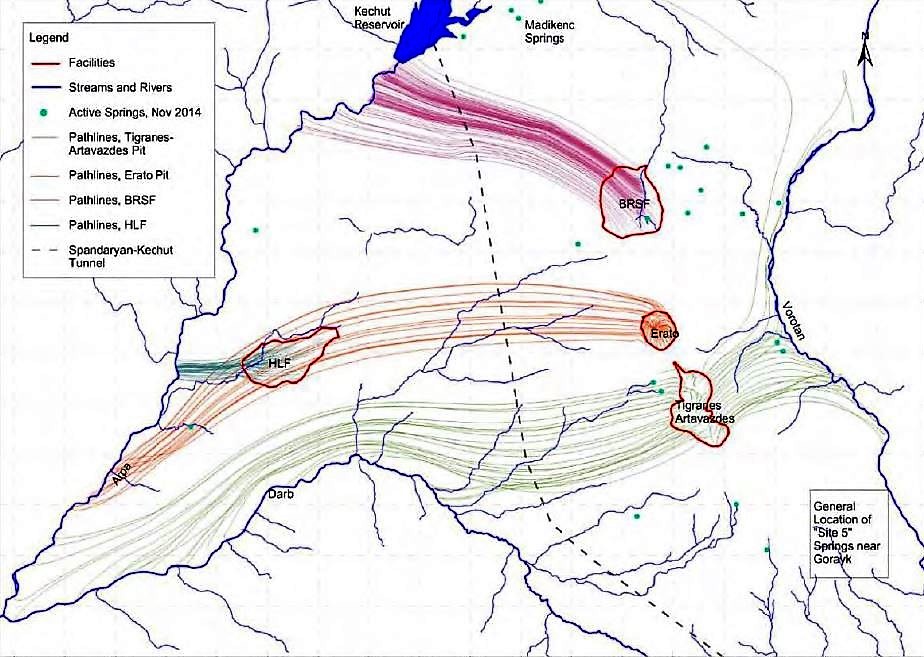 “You probably know that three renown international organizations (from Australia, USA and Canada) on the order of the US-based Harout Bronozian, researched dozens of documents placed on the website of Lydian International and presented their assessments and conclusions on number of environmental risks from gold project in Amulsar, which you can find here. These mainly refer to the potential of acid rock drainage in the mine and its impact on surface and ground water, evaluation of hydrogeochemical problems, as well as issues of water treatment. These analyses were carried out by scientists from three different organizations with PhD degrees and who have dozens of years of practical experience in this field.

In these documents a number of shortcomings, omissions, cases of usage of internationally unacceptable methods, insufficient amount of researched samples, wrong conclusions and assumptions, not assessed or mitigated risks, absence of liability tools of the company and other serious problems found in Lydian’s documents, risk assessments and management plans were scientifically grounded.

It also turned out that Lydian has to implement around three dozens of recommendations and studies some of which are big, expensive and lengthy. These refer to upgrading the heap leach facility, the barren rock facility, geochemical narrative and ARD management to the level envisaged by the working plan as well as predictable models used for water treatment systems and water balance.

As a result of these studies, all independent experts concluded that “Exploitation of mine in Amulsar cannot start until all ecological issues are properly addressed by independent bodies/advisors. Their findings should be incorporated in a management plan of acid and metal containing drainage which will include liabilities and responsibilities of both the government and the company”.

We also studied the reports of the independent experts and concluded that these facts have a scientific base and can be taken as legal grounds for annulling gold project in Amulsar. These documents once again confirm different objections that Armenian scientists, specialists and ecologists expressed for years.

It was also mentioned that it is suspicious that an inexperienced company registered in an offshore zone presents researches and assessments stating that all possible risks are manageable. Now turns out that these suspicions were grounded. It was also stated a number of times that RA government having no experience and expert capacity did not carry out its own expertise trusting Lydian’s assumptions and ignoring all other objections and scientific grounds.

We call on RA Prime Minister to assign the Ministry of Nature Protection to seriously study and assess the above-mentioned papers of experts since it is mentioned there that the cost of water treatment after the mining can surpass the taxes paid to the state budget, while in unforeseen scenarios the state and citizens of RA will fully bear the outcomes. The international practice shows that in closing phase the risks are that the profits of the company go below the expenditure, while the local company announces itself bankrupt and leaves the ARD management to the state for the upcoming years.

It must be clear that Amulsar has a unique geographical location and due to large areas included in this project, there must be special attention paid to it and all risks should be strictly modeled. After all, Jermuk mineral waters (see here), catchment basins of Vorotan, Arpa, Darb rivers, Kechut and Vorotan water reservoirs and the tunnel connecting them, as well as Sevan will be under threat.

Additionally, vast areas in Amulsar are in the impact zone of Sevan Lake, thus directly or indirectly any activity there can impact the lake by affecting the hydro-physical, hydro-chemical, hydro-biological, sanitary, hygiene and other qualitative and quantitative indexes of the lake and the rivers flowing into it (article 8 of RA Law on Sevan lake). The above-mentioned researches prove that these negative impacts are unavoidable and are not fully assessed by Lydian.

These findings are new circumstances that have come to light after the approval of ESIA for the updated project for gold mine in Amulsar. Therefore, we suggest the Ministry of Nature Protection to annul the ԲՓ35 positive conclusion for the ESIA of this project given by the former minister.

We hope the Prime Minister will have enough willingness to objectively assess the situation and  will prevent the pollution of water resources of the country and the region. International experts did the work that was not carried out by state bodies of Armenia.