Why are Armenia’s natural resources so attractive? 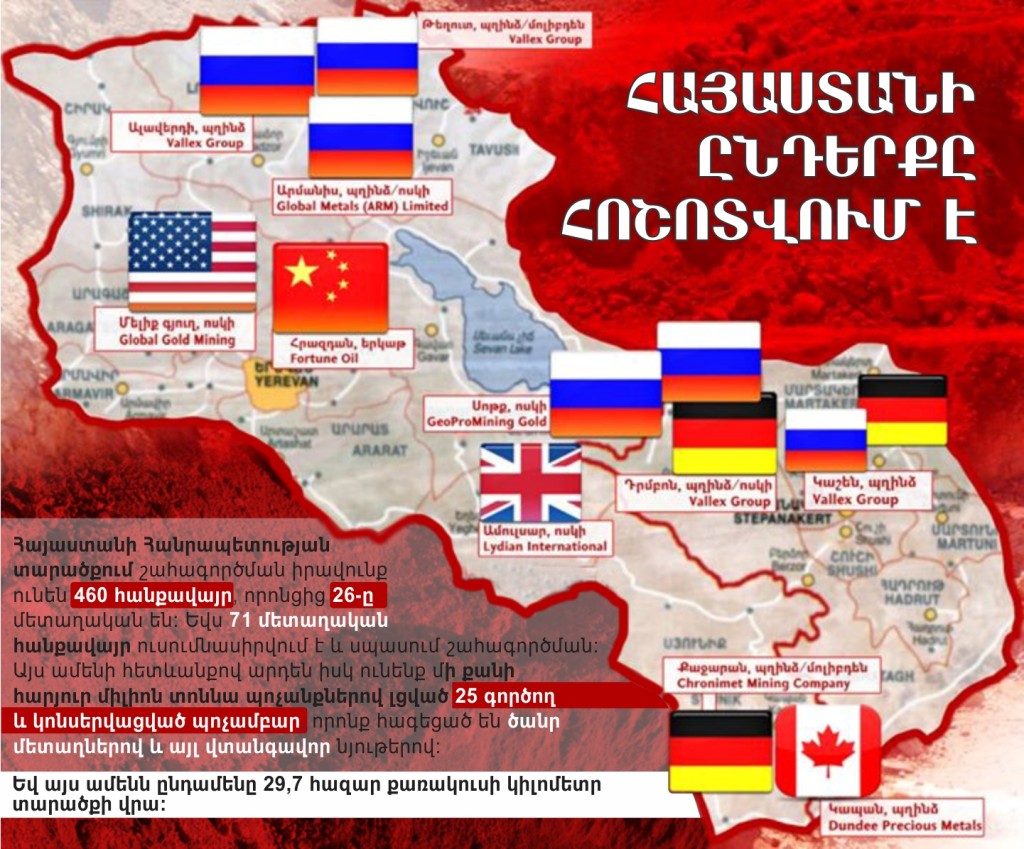 The interest of mining companies is not attenuating towards Armenia’s natural resources. On September 7, 2014 Dundee Precious Metals (DMP) Inc. along with Canada-Armenia Business Council is organizing a forum titled The Mining Industry in Armenia and the Role of Canadian Mining Companies. According to Hratch Jabrayan, Vice President and General Manager of Dundee Precious Metals Kapan, “The purpose of the forum is to discuss the development prospects of the mining industry in Armenia as well as increase the number of investors in the country.”

This forum to be held in Toronto reminds us of the international conference hosted in Yerevan in 2014 from March 25th through 26th, where international banks and other financial institutions, foreign ambassadors, local and international experts and certain mining companies gathered to discuss the upcoming primary mining activities and directions in Armenia. The RA government’s participation in the conference was limited to mainly secondary faces; all of the high-ranking officials were either not present during the two-day discussion or left the discussion shortly after the commencement. And now Dundee Precious Metals Inc. is organizing a forum in Canada, with the participation of the company’s directors and stockholders, Canadian companies, representatives of the Canadian-Armenian community, Armenian clergy, Canada’s Labor Minister, Ambassador of the Republic of Armenia to Canada and former Governor of Syunik Vahe Hakobyan.

“Dundee Precious Metals Kapan” Company (formerly “Deno Gold Mining”) is exploiting the Shahoumyan Gold Polymetallic Mine located in the Syunik Province (Marz). Interestingly, the public is well aware of this company’s activities which plans to present and discuss the mining industry’s status and future plans at this forum. Pan-Armenian Environmental Front (PAEF) published an article on May 13, 2013 in hetq.am where it addressed in detail the main facts related to the company’s activities that contradicted the Canadian company’s declared high values to not harm the environment, respect human health, life and work. These facts, especially those related to the workers’ rights vriolations, were later confirmed by the company’s representative attorney Sedrak Asatyan during a press conference. After all that the company did not attempt to correct its violations and publicly respond to them, but instead resorted to manipulation by changing their name from “Deno Gold Mining” to “Dundee Precious Metals Kapan.” 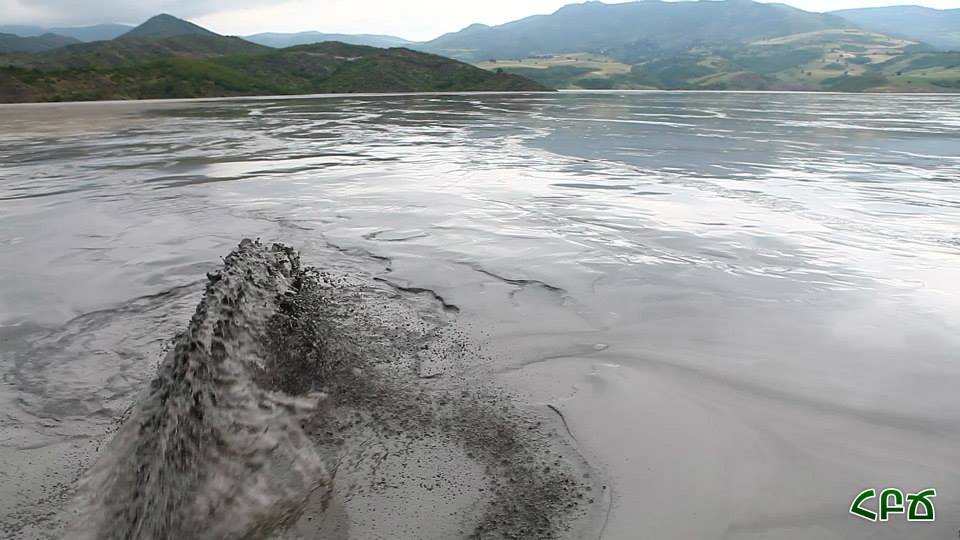 Once again we would like to remind the Canadian-Armenian businessmen, former Syunik Province Governor and the decision-makers at the government level today that Armenia has a total area of 29.7 thousand square kilometers, where approximately 460 mines already have permission for exploitation, out of which 26 are metal mines, and additional 71 metal mines are currently in the study phase and waiting to be exploited. As a result, there are already a few hundred million tons of tailings in 25 open and closed tailing dumps, which are saturated with heavy metals and other dangerous substances. If we continue at these rates, after 2-3 decades there will be hundreds of toxic and extremely dangerous tailing dumps in Armenia, which could be disastrous for the country and its people.

Thousands of hectares of land are already buried under minimal-ore bearing rocks, and the soil is already rich in heavy metals and other dangerous substances. Forest ecosystems, such as Teghout Forest, that were created over the centuries are being destroyed for short-term gain. The surface and ground waters are contaminated from the absorption of the tailing waste and drains released from the tailing dumps, which are later used for irrigation purposes and the heavy metals get transported to the agricultural products and eventually end up in the human organism (see relevant scientific research). And about 90 percent of all this is occurring in the Syunik Province with only 4506 square kilometer. 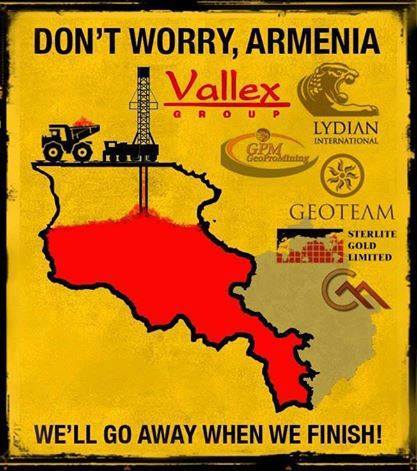 Of course, the conditions for exploiting Armenia’s metallic useful minerals are very attractive, as our so-called government have not only given 100% permission to foreign companies mostly registered in offshore zones to use the wealth that belong to the people but have also created a legal and tax system to make the mining companies feel at home. For the extraction of the natural resources granted by nature to us and the future generations, the rates that have been set are no different than rates imposed in other areas of economy, when they should be much higher.

In Armenia, the mining companies are entirely exempt from paying fees for the tailings, waste dumps and minimal-ore bearing rocks. Even if these were taxed at the lowest rates, such as in Estonia where 1 ton is taxed 1.06 euros, then each year a few 100 million euros will be collected in Armenia, which would make up a lot more money than all the current taxes and fees combined together paid by the mining companies annually.

The environmental fees and penalties for polluting our homeland’s environment and endangering human health are so low that it is more advantageous for the polluters to pay these fees and penalties than to invest in new technology and cleaning systems. Due to almost complete absence of oversight, these companies do not even adhere to the laws and the conditions outlined in the permits.

Can anyone recall where the raw materials from the mining industry extracted in Armenia are being used? We do not have any enterprise that will convert the raw material into a final product. It seems that the vigorous desire to earn money immediately has blinded the officials and the foreign governments are using the opportunity very willingly to get the necessary raw materials from us at discounted prices. The statements about mining industry creating jobs in Armenia are lacking evidence, because according to the Statistical Service of Armenia in 2011 only 15,500 people worked in the mining sector, which amounted to only about 1% of the total employment and it contributed to the GDP growth by only 3%. All these facts are undeniable. We should ask the Canadian government and the people whether they would agree for mines to be exploited under these conditions in their country or not?

We are forced to highlight that we do not have an administrative system that defends the interests of Armenia. Today the government is buried in corruption, and the government is managed like a business. However, the problem is systemic. As long as systemic and fundamental changes have not been performed in Armenia, particularly revision of mining and environmental legislation, taxes and other fees, the mining projects do not have long-term plans, assessment of the expected profits and long-term ecological damage is not carried out, and profits from the mine exploitation do not serve for the actual empowerment of Armenia, we, as Armenian people and citizens of Republic of Armenia, are announcing that we will take every step to stop the destructive process, and strongly condemn such discussions and forums organized by mining companies that only serve to exploit the natural resources of Armenia at a faster rate.

We would like to bring everyone’s attention to the following two documentaries, which illustrate who is exploiting Armenia’s natural resources, how they are being exploited, what environmental and health problems are caused by exploitation of the mines and finally what are the Armenian people getting from all of this.

Posted On 13th February 2017 ~ 0 Comments
Lydian Armenia (former Geoteam): the company who intends to mine gold in Amulsar. The company has no prior mining experience whatsoever. Geoteam was founded…

50M gallons of polluted water pours daily from US mine sites