In 2013 World Bank provided Armenia’s government with around 30 million USD on preferential terms for improving its irrigation systems. The loan is to be repaid within 25 years. Within this loan the government decided to implement “Kaghtsrashen gravity irrigation system” project for 10,4 million USD. The project planned to transfer certain amount of water from river Azat to 12 communities in Artashat region to irrigate around 1232 ha land. The pipes would start from a location beneath Garni temple and would be 28 km long.

Garni residents however opposed the project for years. Eventually on May 21st 2016 the prime-minister Hovik Abrahamyan visited the residents who had again closed the Yerevan-Garni road and in presence of number of media channels officially announced that this project is cancelled and will not be implemented. 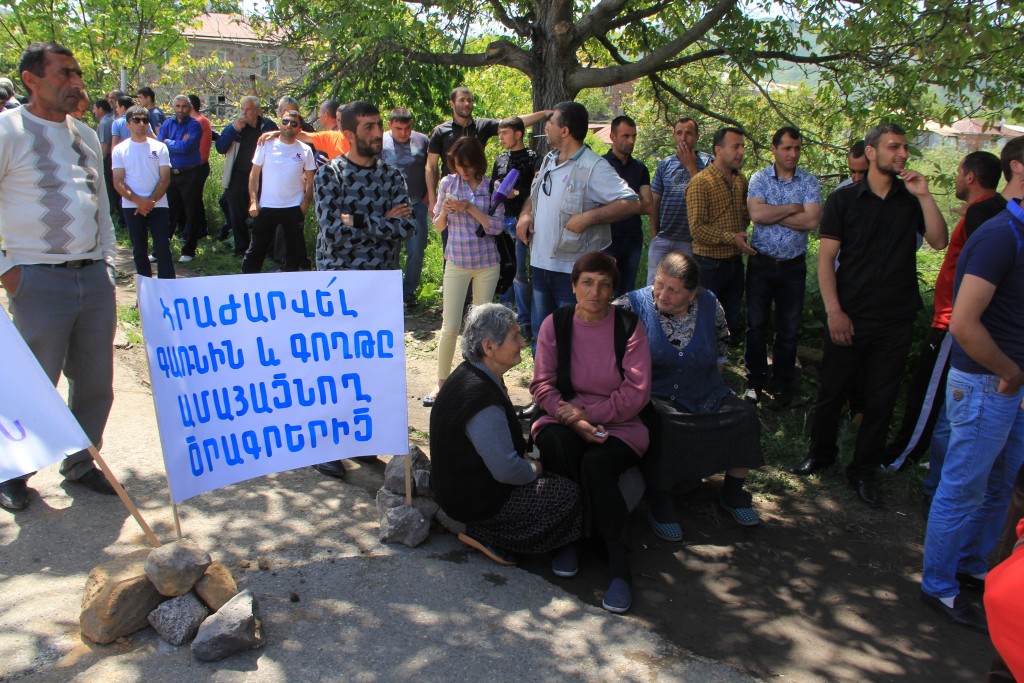 A month after this announcement, representatives from World Bank Washington head office visited Garni to personally get acquainted with the complaints of the residents. It seemed that everything is final and Kaghtsrashen irrigation project is cancelled. However, a few days after that meeting State Committee of Water Economy of Ministry of Agriculture announced that a compromise was reached to change the irrigation project. According to the new plan the location for placing the pipes will be moved 5.2 km down the river Azat.

We would like to present our position to World Bank and those presenting this so called “compromised” version. By the way, it is unclear for us who the discussions were held with and how this compromise was achieved.

1. The problem is the location of pipes anywhere on Azat river and transferring its waters, since during July-September months there is not enough water in the river to satisfy the needs for drinking water, for irrigating the lands of residents that reside next to the areas where pipes will be located, for filling Azat reservoir, for irrigating additional 1232 ha of lands through the gravity flow system and in addition to all of this, for having enough water in the river for ecological purposes. This has been demonstrated through measurements in the river carried out in 2015, as well as through the fact that in the past 10 years Azat reservoir was not filled with water enough for fully satisfying the needs for irrigation and therefore water from lake Sevan was used (brought through Artashat canal). Kaghtsrashen project plans to include additional 378 ha of land for irrigation, which is an additional demand for water that is already insufficient. As a reminder, in the past years official decisions were made in 2008, 2012 and 2014 to take correspondingly 360, 320 and 240 million cubic/meters of water from lake Sevan for irrigation purposes, which is a lot more from officially permitted 170 million c/m. Meanwhile Azat reservoir that has the capacity of 70 million c/m was filled for only 45.96, 60.57 and 45.2 million c/m in the same years.

2. Environmental flow for this project was calculated based on the renowned decision N 927-Ն of Armenia’s government adopted in 2011 which in numerous occasions was characterized by specialists and some state and international organizations as anti-ecological. It has been a year that Ministry of Nature Protection of Armenia with the support of USAID is drafting a new methodology for calculating the environmental flow in the rivers. It anticipates increasing environmental flow in the rivers as compared to the current 850 liter/second of water also foreseen for Kaghtrsrashen project. Therefore, taking 850 liter/second of water as a basis for Kaghtsrashen irrigation project is in its turn unsustainable for aquatic and ecological systems in the area.

3. Availability of water is also a fundamental human right. While states are obliged to protect this right, the private sector is obliged not to interfere with the realization of this right. However, Kaghtsrashen and similar other projects subordinate the needs and rights of some communities over the others. This step contains risks of discrimination and grounds for social tensions. Moreover, Kaghtsrashen project also contains serious corruption risks, since among beneficiaries of this project are several state officials with their vast land areas.

We think that these objections are more than enough and there is no need for further clarification. Once again we would like to call on World Bank to refrain from funding similar project that are harmful for nature and are not in the interests of the wider population. Nature’s ruthless exploitation cannot be compromised.

Open Letter: Funding construction of a new landfill without recycling facilities is not acceptable in the age of human-caused-climate-crisis