In Armenia there are some private companies which recycle paper, plastic, batteries, metals (for a list of recycling companies as of 2014, check the last pages of this publication in Armenian). However, while local solutions are better than nothing, only a systematic approach can give a fast solution to waste recycling, as well as change public’s attitude towards trash. We do need fast actions in this sphere as the pollution of soil, air and water is happening fast too, thus a solution in this field stems from our need to live in healthy and clean environment.However, in Armenia there is no systematic state approach to recycling issue, moreover, the state gets new loans for building “traditional” landfills. 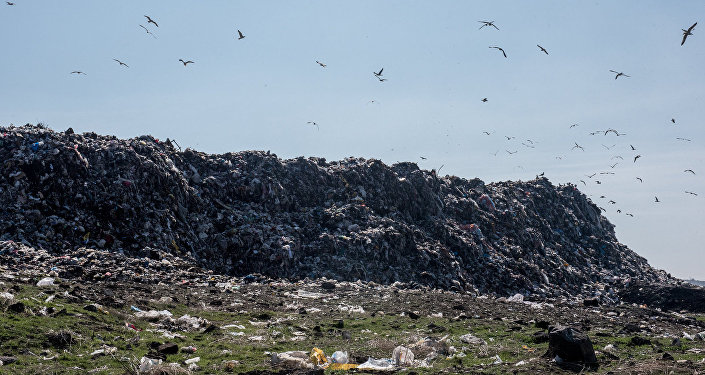 In July 2015 European Bank for Reconstruction and Development (EBRD) and Yerevan Municipality signed a loan contract of about 8 million euro (that will be granted to a company fully owned by the Municipality) for constructing a new landfill next to current Nubarashen landfill. Additional 8 million loan is given by European Investment Bank and another 8 million Euro grant by EU Neighborhood Investment Facility. The goal of this project is to “turn the uncontrolled dumpsite with unacceptable technical and environmental standards into new sanitary landfill matching the EU standards”. According to the project description, this new landfill will be environmentally beneficial, since “it will lead to the reduction of around 3000 tons of methane gas emissions, which is the equivalent of 60.000 tonnes of carbon dioxide”.

Nubarashen landfill operates since 1960s and around 6-8 million tons of solid waste has generated there. Annually 300-360 thousand tons of waste is transported to this landfill.

New sanitary landfill is planned to be built next to the old one, on an area of 29 hectares. The lifespan of the landfill will be 28 years and the filling capacity is 40 m in height. After the closure of the landfill the aftercare will take another 30 years (during this period e.g. the leaks from the landfill will be managed in order to prevent possible penetrations into water or soil; program ESIA description here).

All these advantages of the new landfill are important, however, in their essence they give no solution to the main environmental problem, i.e. absence of recycling, wasting the burning gas and not using it for producing electricity, not dealing with toxic waste, as this landfill will be solely used for municipal and similar non-hazardous solid waste. The project states that “EU requirements related to waste sorting and recycling cannot be applied at the level of this project and this is considered to be outside the influence of the project under consideration”. And this is in case when 25% of household waste in Nubarashen is not biodegradable, while plastic waste increased tenfold since 1989 (source).

The option of producing electricity out of burning biogas was also rejected due to “high cost of the operation and maintenance of this alternative” and the need of a special landfill to deposit the combustion residues.

This means that for implementing projects in the future for waste recycling as well as producing electricity out of burning gas, Armenia would need additional money which would most probably be in the form of loans.

Meanwhile in 2002 Yerevan Municipality and Japanese Shimidzu company were negotiating a project for collecting gases from 52.3 hectares of landfill in Nubarashen and producing electricity. In the framework of this project 1.4mWt electricity generator with gas pipeline engine would be installed working on methane gas from the landfill.  This would not only be an environmental solution for the gas emissions, as the latter would decrease 21 times, but Armenia would produce renewable energy.

Additionally, it would get 550.000 USD annual income and a gift in form of installed equipment without any charge. Japanese side in its turned would benefit from this project as it would implement its commitment laid by Kyoto protocol aimed at reducing greenhouse gases in the atmosphere. According to Kyoto protocol, similar projects can be implemented not only in developed but also developing countries. Japan had the obligation to reduce the emissions by 6% from 2008-2012. For that reason the Japanese side also covered all the costs of this landfill project (source).

However, Armenia’s Ministry of Economy raised its reservations regarding this project stating that the Japanese side would get a monopoly over Nubarashen landfill which would limit inclusion of other operators in the field of waste management. Moreover, World Bank played its role in this decision as it had assessed this project as “a project with high financial risks”. And that’s in case when the Japanese side bore the full cost of the project (source).

In 2009 based on an agreement with the Japanese company Shimidzu a small area of 7.5 hectares was allocated to the company, where it installed the biogas collecting facility. However, the gas gets burned here and no electricity is produced. Despite this, according to the UN data, as a result of biogas combustion at Nubarashen, carbon dioxide emissions have reduced by 100.000 tons since 2009. In case the Japanese project was realized in its full scale, this number would be threefold.

Besides, the Japanese company initially planned to invest 8 million USD, while during the project lifespan of 16 years Armenia would get income of about 8 million 800.000 USD. This means that had the project started in 2002 when the negotiations started, in 2018 Armenia would have earned first 8mln USD and could itself invest in constructing a new landfill or else in building recycling facilities.

Moreover, in 2014 EBRD provided another 3.5 million euro loan for constructing 8 similar landfills in Kotayk and Gegharkunik regions. Armenia could fund these landfills itself, had it implemented the project with the Japanese company.

However, Armenian government not only refuses to implement green sustainable projects, but also refuses to ease the loan burden of Republic of Armenia. As of 2016 Armenia’s debt amounts to 5.9 billion USD which makes 55% of its GDP.

Interestingly, in 2013 Republican party of Armenia included the issue of waste management in its election campaign for Yerevan Municipality’s Council of Elders. It planned to establish waste sorting and recycling enterprises within 5 years. Despite not implementing this point, one can certainly conclude that the ruling group clearly realizes the urgency of the problem however as a result of its lack of will, Armenia currently negatively contributes in global climate change, while the government violates the human right to live in a clean and healthy environment.

International financial institutions such as World Bank, EBRD, European Investment Bank, as well as EU Neighborhood Investment Facility in their turn thus not only do not contribute to greener policies, but they become complicit in the above mentioned violations through their soft approach, misleading guidance and funding of unsustainable projects.

“Responsible” Plunder of Nature: Problems Covered up by Lydian Regarding Exploitation of a Mine in Amulsar

Posted On 7th December 2016 ~ 0 Comments
Business and Human Rights Resource Center turned to Lydian International, a company that intends to exploit a gold mine in Amulsar, a mountain near Jermuk,…