Still in December 2016, Armenian Environmental Front civic initiative published an open letter addressed to the cofounders of “Aurora” humanitarian prize Ruben Vardanyan and Noubar Afeian with a request to explain the contradictions in their for-profit and allegedly charitable activities. The point in matter is specifically about IDEA Foundation having proclaimed mining in Armenia as a strategic area of activity, financing a huge open-pit mine near Jermuk mineral water town that endangers Armenia’s most important water resources on the one hand, and speaking of the contradictory development of Armenia through tourism, high technologies and humanitarian prize awards on the other hand.

Since December we haven’t heard any feedback to our open letter published in various media and to our private letters either. This behavior was in line with Armenian General Benevolent Union’s (AGBU) behavior, to which we had addressed an open letter too, but never received a response. It is worthwhile mentioning that we comprehensively addressed the issue of how various actors, including Ruben Vardanyan, AGBU, banks and Lydian International offshore company claiming to stripmine Amulsar are connected in our article published in February 2017. 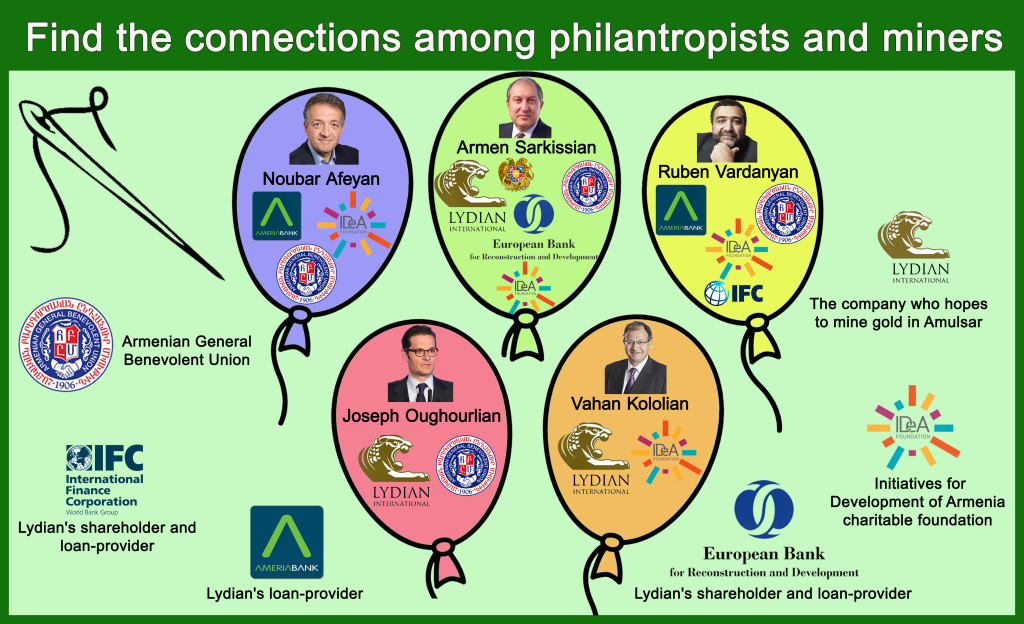 The project of turning Amulsar Mountain into an open-pit mine is in essence a humanitarian crisis given its extremely hazardous social-ecological impact not only on Armenia’s, but on the entire region’s freshwater resources, including Lake Sevan, Spandaryan and Ketchut reservoirs, Arpa and Vorotan rivers, as well as on Jermuk sanatorium town and its mineral waters.

On the eve of the “Aurora” humanitarian prize award, we call upon the mass media to republish our open letter directed to the cofounders of this award and to demonstrate an analytical and critical approach towards initiatives well disguised under advertisement packaging, the founders of which are not eager to act in a transparent and responsible manner regarding other extremely important public issues.