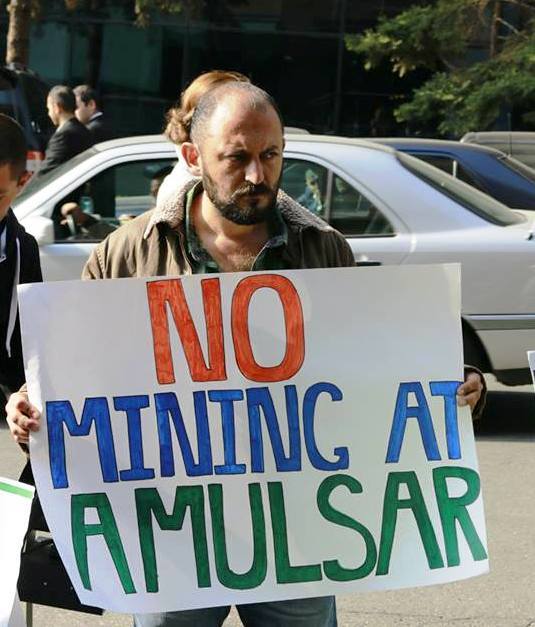 People who are concerned with environmental issues in Armenia got convinced once again that the environmental inspection in our country does not serve its intended purpose, but it only automatically confirms the political decisions that have been made for realizing this or that program. Another evidence of this was the environmental impact assessment report #76 given on October 17, 2014 by the Ministry of Environmental Protection of Republic of Armenia (RA) to Amulsar mining complex working draft presented by Lydian International/Geoteam CJSC.

No professional analysis and evaluation of the environmental hazards of this huge and disastrous project was carried out by the ministry experts. Instead a mere documentation study was completed and a ten-page summary was written which doesn’t provide the public with sufficient information.

Since the authorized state bodies did not do their duties assigned to them by laws and decisions of the RA, we have to reflect on the uncontrolled dangers of Amulsar mine in series of short analytical articles, so that the public will be informed of the real situation. In these first series of articles we will present the hidden dangers of the method of sodium cyanide heap leach gold and silver mining.

Sodium cyanide (NaCN) is an extremely strong and fast-acting toxic substance, which penetrates into human organism within 2-4 hours and causes a painful death. For an adult only 0.3 grams of cyanide is a deadly quantity. If it passes to the lungs through breathing it will cause almost instant death within a minute.

“Geoteam” CJSC owned by Lydian International Limited, registered in offshore zone, is planning to carry out the extraction of gold using this highly toxic substance, only 1km away from Arpa River which feeds the whole Vayots Dzor region, 1.2 km away from the nearest village settlements Gndevaz and 7.6 km away from Jermuk rehabilitation center. We should note that 2000 tons of sodium cyanide and 1,000 tons of hydrochloric acid (HCl), will be used per year and, 18 000 tones of cyanide, or 60 billion lethal dose during the nine years of mine operation.

Let’s try to understand how reliable this method is and what advantages and disadvantages it has and in general: why use cyanide? Cyanide leaching method has been used for more than 100 years, but only in the last 30 years it became popular due to the possibility of large volumes of ore processing as a result of installation of the so-called closed systems.

Only the application of this method makes it a profitable deal to operate mines with less than one gram per ton gold content (in the case of Amulsar it’s 0.7-0.8 g / t). And this is the only and most important reason why Lydian / Geoteam have chosen this method of extracting gold.

But behind the cyanide leaching method serious primary and secondary risks are hidden which in many cases are uncontrollable. Primary risks include fires in cyanide warehouses, accidents in technical constructions, the emissions of toxic solvents, natural disasters, terrorist acts and other related accidents, the consequences of which can be very serious both for people and the environment.

As for the secondary risks, their nature is much more complex and their negative impact stays forever. During the operation the gold and silver containing ore is being crushed and as a result all of the elements or metallic and non-metallic compounds are extracted. This mass is processed by cyanide and water mixture and as a result of the chemical reaction gold is disconnected. However, cyanide comes into reaction not only with gold but also with ore-free and many other materials, elements and heavy metals, which result in nitrates and other chemical compounds. In case of Amulsar the ore contains many precious and heavy metals such as cobalt, copper, iron, nickel, mercury, zinc, tungsten, bismuth, chromium, lead as well as harmful toxic elements such as arsenic, selenium, beryllium, cadmium, which will stay in the waste and in the future will pollute and endanger both the environment and people’s health as well as ecosystems.

Currently, the scientific world has not come up with a means of neutralizing these compounds and hazardous wastes that are dumped directly into the environment and forever remain as a “gift” for generations to come. Therefore, the extraction of gold or silver through the use of cyanide is only profitable if the mining company does not pay any fees for the generated waste. If the future generations attempt to neutralize the compounds and hazardous wastes, then it will most likely cost them a lot more than the profits generated from extraction and sale of gold. Residents of Armenia will receive 100 million tons of extraction waste containing heavy metals and toxic elements as a “gift” in return for 60 tons of gold extracted from the Amulsar mine. 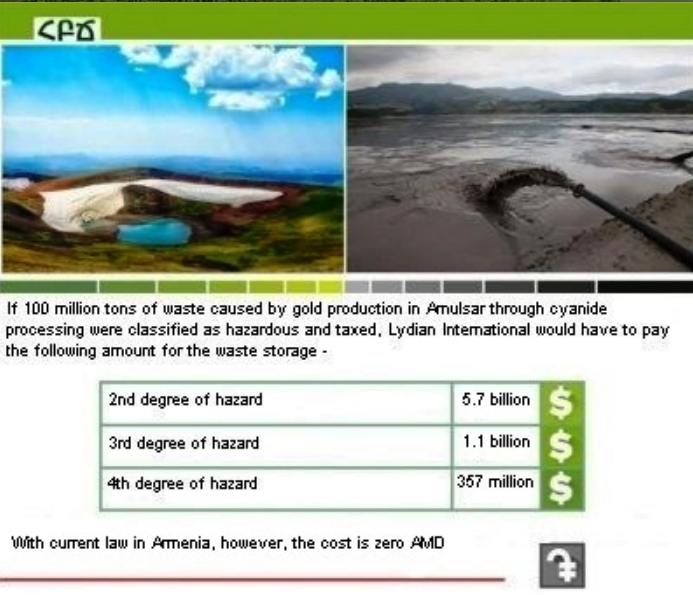 In response to the Romanian Baia Mare cyanide spill in 2000 that resulted in an environmental disaster, the European Parliament and the European Council adopted Directive 2006/21/EC, which discusses the management and regulation of waste generated by the extractive industry. Article 13 clearly prohibits the deposit of waste containing more than 10 grams of weak acid cyanide per ton into the environment. In accordance with the requirements of Article 14, the extractive companies are required to provide financial guarantees for clean-up, rehabilitation and restoration of the contaminated areas after the closure of the mine. Of course, these and many other liabilities set by international standards have been neglected by Lydian International Limited, Geoteam and Armenian public authorities.

We conclude that the extraction of gold through the use of cyanide is not effective for mankind, and to permit the construction of cyanide heap leach in the immediate vicinity of rivers and settlements is simply insane, and the impacts on the environment and mankind are impossible to predict or to manage, not to mention the daily environmental pollution occurring as a result of the gold extraction.

And we keep hearing verbal promises, such as “Nothing is going to happen”, “This is a safe technology”, “We are working in accordance with the international standards”, etc. Can they guarantee safety? Are we obligated to listen to them? How can people exposed to this danger sleep peacefully? It seems the longing for immediate profit has blinded everyone and for the sake of profit they are ready to “play” with cyanide. Indeed to “play” with it, because it is with the help of cyanide that they can get more money.

False Information in the Affidavit of Lydian International’s Chief Executive to the Canadian court about mining in Amulsar: part 1

Posted On 22nd February 2020 ~ 0 Comments
In January 2020, a number of documents and information about Lydian International became accessible to the public. The reason why this was possible is that…

Posted On 9th October 2019 ~ 0 Comments
Mediamax, a media outlet that has served to praising Lydian Armenia, published an “exclusive” interview on September 24 with Jürgen Rigterink, Vice-Chairperson of the European…