Corrupt Land Sales to Lydian in Amulsar: Gndevaz Mayor and his Son are under Court Trial 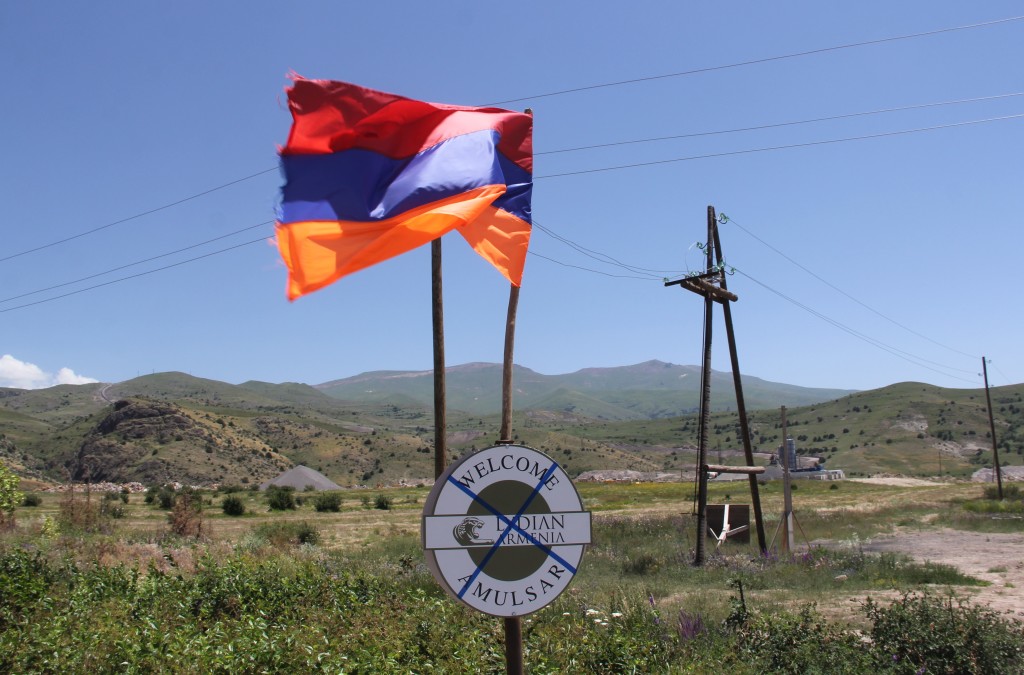 epress.am
Armenian Environmental Front (AEF) informs of the court hearing of Gndevaz Mayor (former Mayor and current Administrative Officer) Hayrapet Mkrtchyan’s and his son Layert Mkrtchyan’s criminal trial held at Yeghegnadzor court on May 5 2020. Hayrapet Mkrtchyan is charged for abusing his power as a state official (Mayor of Gndevaz), contrary to his service to the community, for negligibly inflicting significant damages to the interests of the community in his own self-interest. In 2014, Mayor Mkrtchyan fabricated community land auctions won by his own underage son, Layert Mkrtchyan at a price significantly lower than cadaster prices, by selling around 10 ha of communal grasslands at around 410.000 AMD (roughly 850 USD). His son then resold the same plot in 2015 to Lydian Armenia (formerly “Geoteam”) at an incomparably 360-fold higher price of around 147 mln AMD (roughly 310․000 USD).

AEF presents the following concerns regarding the pretrial investigation and follows with official indictment conclusion tried at court.

“While we will present the official indictment conclusion around which court trial is expected to unfold at the end of this statement, we want to start off pointing out to a number of significant shortcomings in the pretrial investigation fatally important for finding out the motives behind which the Amulsar Gold Mine project was forced upon the shoulders of the Armenian people (already in August 2019, we presented some of our concerns regarding the investigation of this case).

1) The pretrial investigation was carried out with flaws and is incomplete. It was transferred in August-September of 2019 from the regional investigative body to the Investigative Committee’s Department for Specifically Important Cases and was under the supervision of the same group of investigators conducting the ill-fated Amulsar case investigation headed by Yuri Ivanyan. It was during these exact months that the investigative team, headed by Ivanyan, misinterpreted and distorted the findings of the international independent review of the Amulsar EIA and in effect brought the potential process of disputing the legality of permits provided to Lydian based on its own flawed data to failure.

a) One of the shortcomings of Gndevaz Mayor’s pretrial investigation was the fact that part of the documents of communal and state importance (log books, decisions by the Mayor and municipal council) were concealed and not available neither at the state archives, nor at the community administration (already enlarged with Jermuk town). These documents, however, popped up and were made available to the investigators in an undisclosed manner. The investigating body did nothing to investigate responsibility for concealing state documents and to make a criminal characterization to it.

b) Another of the pretrial shortcomings is failing to investigate other instances of expropriating communal land by Hayrapet Mkrtchyan and other officials, even under the circumstances that, as the investigative body claims, these transactions were made at market prices unlike the one currently under trial and made at ridiculously low prices. During that same period, lands were sold to Mkrtchyan’s other relatives, however it is impossible for the public to know or to have earlier known what kind of transactions these were, as municipal documentation and important logbooks were hidden.

c) At the moment of land transaction subject to criminal charge, Mayor Mkrtchyan’s son Layert was underage. This adds the amount of responsibility on part of Hayrapet Mkrtchyan.

d) Investigation was not carried out to find out whether and to what extent were other state institutions and high officials aware of these transactions. Investigators also failed to find out what Hayrapet Mkrtchyan did with the 360-fold high amount paid to his son by Lydian. It is possible he transferred it to some other officials. Failing to find this out means not attempting to investigate the whole chain of the transaction and the possible corruption chain at all. Let us remind that recently charges were brought against CEO of Multi Group and Gagik Khachatryan for an alleged bribe made in the form of a credit contract never redeemed. It appears, investigation was held beyond the level of documentation and revealed corruption. A similar investigation has not been carried out in the case of Hayrapet Mkrtchyan.

e) Hayrapet Mkrtchyan’s role in the issue of Amulsar mine project has not been investigated, in other words, the Lydian-favoring decisions he made or used his power to be made by the municipal council, all the way starting from granting an initial consent to the project, to his organization of public hearings and his aggressive behavior during them, has not been investigated.

2) The indictment is ridiculous in the way it downplays Hayrapet Mkrtcyan’s responsibility as if only negligibly was a significant damage inflicted upon Gndevaz community’s lawful interests. The problem is not just a financial damage to the community, but also the fact that Mayor Mkrtchyan and possibly other officials may have pursued self-interest in advancing the Amulsar mine project ignoring local complaints and resistance.

3) It is also unacceptable that while pretrial investigation was ongoing, former Mayor Hayrapet Mkrtchyan “redeemed” part of the criminally inflicted damage by transferring 70 mln AMD to the Investigative Committee’s deposit bank account. Questions arise of how, based on what kind of legal norms can the investigative committee decide that the issue of this crime can be resolved by transferring money, while the community’s 10ha of grasslands were illegally expropriated and then resold to Lydian 360 times higher the price.

Excerpt from the indictment conclusion

Pretrial case N 35100219 was transferred to Ararat and Vayots Dzor Court on February 21, 2020 and is accessible on online portal DataLex.

“Hayrapet Edik Mkrtchyan is indicted for using his powers, with the support of his son Layert Mkrtchyan, for self-serving interest contrary to his service to the community, while in tenure of his position. As a result, Gndevaz community’s lawful interests were significantly damaged that negligibly brought about severe consequences.

Hayrapet Edik Mkrtchyan held the position of Gndevaz community (now joined to Jermuk community) Mayor between September 28 2012 and October 2 2016, and in his tenure of a community servant in a self-governing body, was empowered with various organizational, administrative, managerial and logistic functions. By virtue of holding this position, he participated in meetings convened by “Geoteam” company at the community in relation to Amulsar gold mine exploitation, and starting from 2013, he was aware that the government of Armenia had decided to move the cyanide heap-leach facility from Saravan community of Syunik Marz to Gndevaz community. Realizing that this circumstance would inevitably lead to the necessity for Geoteam company to buy the lands in the location where the facility was going to be constructed, and that the company was ready to pay a high price for that, he pursued a self-interest and planned to fabricate an auction in order to obtain the communal lands located in that area under his son’s name, and later on, to sell them to the company at incomparably higher price.

In order to carry out his intention, empowered by powers to present a suggestion to the municipal council to alienate community property, to actually alienate it by the council decision, to manage and put into use the communal property (lands) together with the municipal council as is entitled by the Civil Code, Land Code and other laws, on March 27 2014 he convened a municipal council meeting and received an agreement from the council to alienate a land plot under Cadasre Code 10-036-0214-0090. He decided to sell the land through an auction setting a starting price of 372.000 AMD, 60% lower the Cadastre price.

Later, Haryapet Mkrtchyan, in neglect of restrictions set by Article 3, Part 2 and Part 3 of the “Public Auction Law” for children, as well as other persons who are not entitled to property rights for lots under auctions, registered his son, Layert Mkrtchyan, under 18 years as a participant of the auction. On May 6, 2014, Layert Mkrtchyan participated in the auction personally organized and held by Hayrapet Mkrtchyan at the municipal administrative building, and supported him in overcoming the obstacle of the Land Code, Article 68, Part 7 by which the highest price bidder would win the auction and therefore he bid 410.130 AMD for the land plot under 10-036-0214-0090 cadastre code and obtained it.

After this, on May 29 2014, Layert Mkrtchyan continued supporting Hayrapet Mkrtchyans criminal acts, and not being entitled to civil entitlements, signed a land purchase contract with the community of Gndevaz as represented by Hayrapet Mkrtchyan at Jermuk office of State Cadasre Committee for the plot  coded 10-036-0214-0090 at the price of 410.130 AMD. Later, on May 26 2015, as was the initial intention of Hayrapet Mkrtchyan, he sold the same plot at the incomparably higher price of 147.300.838 AMD to Geoteam CJSC company later renamed Lydian Armenia.

As  a result, with their actions, Hayrapet and Layert Mkrtchyans inflicted an asset damage to Gndevaz community in the amount of 146.890.708 AMD, the community budget was deprived of cash revenues, and by using the communal assets for personal self-interest, they  discredited the good reputation of the self-governing body, degraded the principles and purposes of communal service.””