Another Illegal Mining in Armenia: this time by a German company

The Armenian Environmental Front (AEF) civic initiative’s video shooting in the area of Artsvanik tailing dump owned by Zangezur Copper Molybdenum Combine Closed Joint Stock Company (ZCMC) showed once again that the wastewater from the tailing dump continues flowing into the Norashenik and Artsvanik Rivers and then gets mixed with the Voghji River. As a matter of fact, the rivers serve as waste carriers for many years, while governmental bodies in charge seem not to care. You can watch “Artsvanik Tailing Dump Wastewater Continue Flowing into Rivers” video for more details.

A question arises: whether the administration of “Cronimet” Company and ZCMC General Manager Nil Stivenson will ever be allowed such irresponsible attitude towards environment and water resources in their home countries and what kind of measures governmental bodies in these countries will take towards such companies. 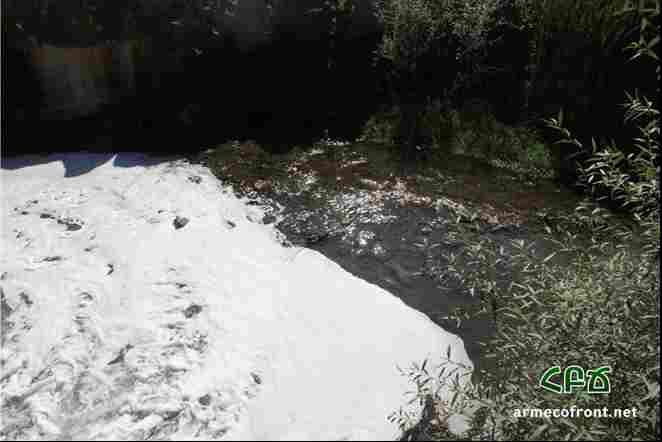 In the 21st century the corporate social responsibility (CSR), sustainable development and ethical business behaviour become more and more urgent and important topics worldwide. But this fact does not limit many companies to do business neglecting the basic principles of CSR, Sustainable Development, Business Ethics, Codes of Conduct and Ethics and even the state legal framework where they run their business. This issue concerns also the companies which come from developed countries and should have carried the value-system of those countries, such as Germany.

The mining company Cronimet Mining AG[1] with German ownership is not an exception in Armenia.

Armenian Environmental Front (AEF) makes investigations on illegal mining in Armenia. One of the investigations of AEF on Cronimet Mining AG brought to the surface the following picture. 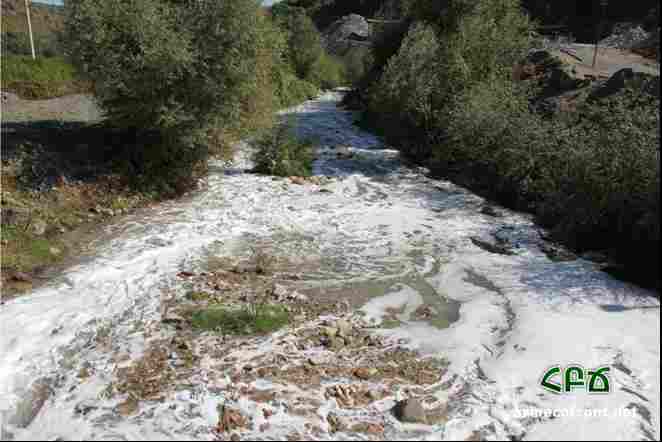 Wastewater mixes with clean water of the river

The recent legal offence on water pollution, about which the state bodies were informed, was related to Hanqasar’s mining done by ZCMC. The single active tailing of ZCMC is called Artsvanik, which is located about 36km from ZCMC. There is a pipeline built to transfer the wastewater occurred in result of ore production to the tailing of Artsvanik. But there is no pipeline built which comes out of Artsvanik and which would work by water circulation system, which is necessary for reusing the wastewater and not throwing it into the rivers. As a consequence the filtered tailing dump wastewater flows to the Norashenik and Halaj rivers. The latters come together with the Voghji River. So these rivers have been serving as wastewater transporters and carriers for years and it seems there is no control over it at all.

The next legal offence is that ZCMC currently has permission to mine only 12.5 million tons of ore annually[2], while the official reports of Representation of the CRONIMET Mining AG in the Republic of Armenia announce 15-18 million tons of ore mining in 2011-2012 accordingly and they aim to increase it to 21 million tons by 2014 (Picture 1)[3]. According to the Law of the RA on Environmental Impact Assessment (Article 11.6) this is a big violation of RA law and the authorized body must suspend or ban the intended activity until appropriate conditions will be created for the assessment conclusion. This requirement is not fulfilled. 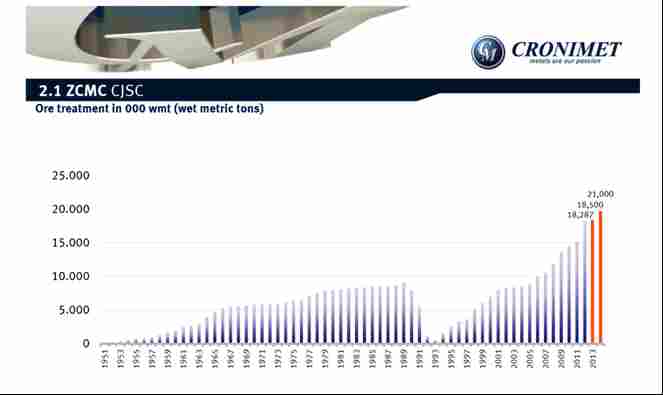 According to studies[4] [5] [6] conducted by the National Academy of Sciences of Armenia in 2005, 2007, 2011, indicate that irrigation water and agricultural food in Kapan and Kajaran contain heavy metals, the quantity of which exceeds the permitted limit. Till now no steps have been taken to repeal the contamination and the health state of the inhabitants of the region stays unexamined. This negative impact can currently be measured only approximately. The recovery of the consequences of this impact, such as health and nature damages, is hard to imagine for several decades. This fact is also one of the conditions causing emigration of Armenians that continues to rapidly grow. According to International Labor Organization in Syunik, where Kapan and Kajaran are located, there was higher than average migration rates though the unemployment rates were significantly lower than the country average during 2008-2009[7].

ZCMC annually takes about 70 million m3 water of excellent (I) and good (II) quality classes from the Voghji and Geghi Rivers, and returns it as wastewater of Artsvanik tailing dump to the nature with almost the same volume, but already of unsatisfactory (IV) and bad (V) quality. 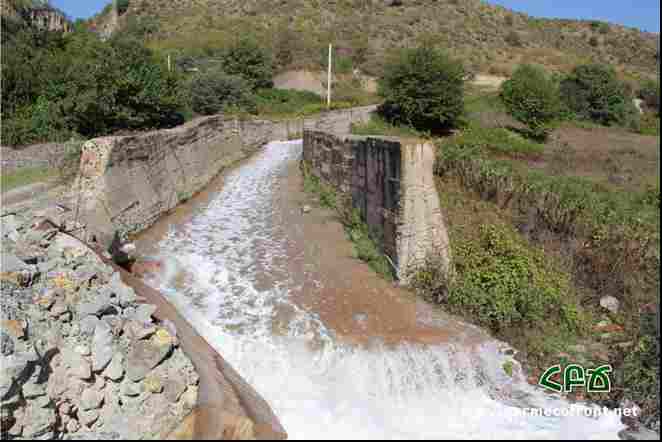 The unsatisfactory and bad quality of the Norashenik, Artsvanik and Voghj River water full of toxic and heavy metals (cobalt, cadmium, manganese, molybdenum, copper, antimony) is caused not only by the elements of mining production but also by the enormous anthropogenic pressure. Tailing dump wastewater and surface sewages flow along the grooves into the Artsvanik and Norashenik rivers and seriously damage water ecosystem of the rivers. As a result of the high content of toxic metals for instance in the area of Artsvanik River which is below tailing, one can find no water biodiversity, such as  phytoplankton, zooplankton, zoobentos and fish.

So far two of the offences are presented in this article towards which no fundamental steps have been taken by the state bodies of Armenia (only few symbolic fines) so far. The reason for this inactivity is unclear or presumably stems from the Cronimet’s own irresponsible attitude and absence of accountability.

Below are the related pictures, videos and articles:

Video 2. Mining is a Threat to Syunik – Armenia

Some previous articles in Armenian from Armenian Environmental Front

[2] Conclusion of an expert examination of the impact on environment from the Ministry of Nature Protection in Armenia, 2007 http://www.mnp.am/images/files/nyuter/2013/ezrakacutyun/2_6_Qajaranipxndz_ezrak.pdf

[4] «Pollution level of the Meghriget, Voghchi and Artsvanik Rivers with Heavy Metals and Aluminium», G. A. Gevorgyan, A. A.Danielyan, K. V. Grigoryan, S. H. Minasyan, The National Academy of Sciences of the RA, Center for Ecological-Noosphere Studies, 2011, Yerevan http://www.ysu.am/files/4%20POLLUTION%20LEVEL%20OF%20THE%20MEGHRIGET,%20VOGHCHI%20AND.pdf

[5] «Assessing Environmental Impact of Tailing Storage Sites from Mining and Dressing Production and Activities of the Kapan Copper Enterprise on the Territory of Kapan Town (Syunik Marz», Dr.S.H. Arevshatyan, The National Academy of Sciences of the RA, Center for Ecological-Noosphere Studies, 2007, Yerevan

Posted On 28th October 2016 ~ 0 Comments
Since the unmanageable risks of mining in Amulsar are not properly assessed by Armenia’s government, the mine should not be exploited. This is one of…