“The government of Armenia and its citizens should stop Amulsar mine”: international experts

Four internationally famous experts (from Australia, USA and Canada), with the help of American-Armenian Harut Bronozian, have been researching documents from Lydian International’s website since July of last year and concluded in their evaluations, that Amulsar gold mine project poses various environmental risks. On May 16 2018 they presented their final conclusion, which we are bringing to the attention of the new Armenian government and all the interested entities.

The Amulsar Gold Project is nearing the end of construction and is at a crucial point in its development both economically and environmentally. The project is located in a sensitive area of national importance that supplies clean water for drinking and agricultural uses across Armenia (see https://goo.gl/l5pWkJ for location and topography). Given the planned mining approaches, there is a very high risk that acidity, metals, cyanide and thiocyanate, sulfate, and nitrate will pollute groundwater, springs, rivers (the Arpa, Darb, and Vorotan), and the Kechut Reservoir for decades or longer (see https://goo.gl/FYwyRD for water and contaminant flow paths). Lydian proposes measures that are inadequate to prevent their release into the environment. Protection of water quality is the most critical and long-term environmental concern for large-scale metal mines such as Amulsar. We provide several examples showing how Lydian’s plans underestimate the potential of the mine to pollute water resources and discuss their implications.

Lydian and its consultants have made simplistic and inaccurate statements about the potential of the mine to pollute waters. For example, they claim that all the ore is oxide. This implies that cyanide heap leaching will be effective in recovering gold from the ore and that the spent ore remaining on site will not pollute springs, groundwater or surface water. Lydian has further stated that none of the Amulsar ore and only a portion of the barren (waste) rock will generate acid. These statements are not supported by Lydian’s own results or by experience from other mine sites. Lydian’s own data about the geologic complexities at the site show that sulfide minerals are present in the ore and waste and that it will not be possible to adequately separate them from ore, which means that there is a potential for long-term acid generation and contaminant release (even after lime addition) from the spent heap and the waste rock. The potential for long-term release of contaminants cannot be properly determined with the present data because too few samples of ore and waste were tested and because samples with higher metal and sulfide content were excluded from testing, resulting in a bias that underestimates contaminant release.

Using Lydian’s data and the approach recommended by the industry-sponsored GARD Guide, nearly all the ore and waste samples analyzed are potentially acid-generating. When acid drainage forms, metal and sulfate concentrations increase markedly. Lydian has focused on acid-generation potential but not talked publicly about the potential for Amulsar wastes and spent ore to leach metals and other contaminants to nearby streams and groundwater. Their test results show that leachate from the spent ore and waste rock at Amulsar will contain high concentrations of antimony, arsenic, copper, and zinc well above Armenian water quality standards. Antimony and arsenic can easily enter the food chain and pose a risk to humans at low concentrations. Copper and zinc are toxic to fish and other aquatic biota at low concentrations, especially in waters with low hardness values, such as those at key locations near the mine. Other important contaminants of concern at Amulsar with known toxicity to humans or aquatic life include ammonia, cadmium, cyanide, lead, mercury, nitrate, and selenium. Experience at other heap leach operations shows that thiocyanate is also likely to form and will require removal because of its toxicity. Lydian has presented a water treatment scheme that removes a small number of these contaminants, but they cannot state with certainty that other contaminants like arsenic, antimony or mercury will not be released and adversely affect the water and crops of people living downstream from the mine.

The potential environmental consequences are similar for many of the issues identified: contamination of groundwater, springs, streams; water in the Spandaryan-Kechut Tunnel; and water in the Kechut Reservoir. The worst water quality is predicted for leachate from the waste rock facility (BRSF), which is up-gradient of the tunnel, the Kechut Reservoir, and the Arpa River. Because waste rock test samples were not representative of the higher metal and sulfide content, the impact of contaminated water to aquatic life and people downstream from the mine is likely to be more severe than predicted. Decreased flows in streams, springs, the tunnel, and the reservoir and lower groundwater levels due to pit dewatering and decreases in groundwater recharge caused by the presences of large waste and ore facilities covering the landscape are also identified in the Amulsar Environmental and Social Impact Assessment  (ESIA). Such degradation in water quality and clean water availability are highly problematic for an area that provides much of the country’s water supply to the Kechut Reservoir.

The Amulsar ESIA shows the predicted flow paths of contaminated water travelling from mining sources (waste rock, cyanide heap leach facility, open pits) to water resources during mine operation and closure. Contaminants from the waste rock pile will flow to the Kechut Reservoir and the Arpa River. The cyanide heap leach facility (where ore is place and will remain during closure) will partially cover a tributary flowing to the Arpa river, and contaminants are also predicted to flow to the Arpa River through groundwater. The Tigranes- Artavazdes Pit contaminants are predicted to flow to the Spandaryan-Kechut Tunnel, the Vorotan River, and the Darb River, which flows into the Arpa River. Flow paths from the Erato Pit, which will not be backfilled, reach nearly all receptors, including the Arpa River upstream of the Kechut Reservoir. These results are based on a groundwater model that did not consider the abundant faults in the area that could bring contaminants more quickly, and with less dilution, to unanticipated receptor locations, including springs. 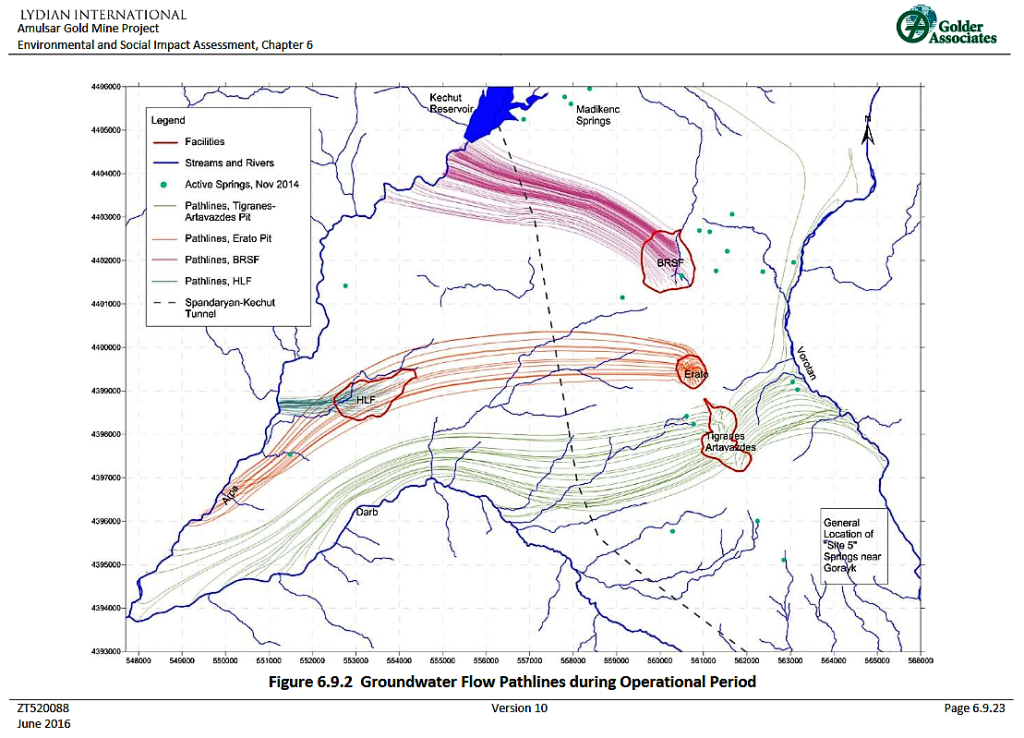 The Amulsar Gold Project has some mitigation measures planned to limit environmental impact, but because the potential impacts have been underestimated, the mitigation measures have  not been designed conservatively and are inadequate to truly protect water resources. The proposed passive water treatment system is not designed for acid waters, yet Lydian’s data strongly suggest that it will need to treat acid drainage. Additionally, it has no design basis for removal of some of the contaminants predicted in the drainage produced at Amulsar. Finally, the key proposed mitigation measures are untested in any way prior to operations, as is normally required for mine approval.

Possibly the most important concern is the lack of any mine water treatment until Year 5 of mining. Uncertainties in the amount of “excess water” (water not needed in mine processes) that will require treatment are high and have not been resolved, other than an unacceptable proposal to use it for dust suppression. Lydian is assuming that groundwater will not flow into the open pits during mining, despite the fact that their monitoring and modeling results show that it is likely to occur. Based on this erroneous, non-conservative assumption, Lydian concludes that all water pumped at the mine will be used in the mine processes. If their assumption proves wrong, which appears likely, mine-influenced water will need to be treated and discharged when the pits are created, but Lydian has presented no contingency to deal with this scenario. Lydian also assumes that the treatment needed starting in Year 5 of mining can be a less expensive, lower maintenance passive system rather than a more reliable active system such as lime precipitation. This passive treatment system has been shown to be inadequate for all the contaminants predicted in mine water. Their optimistic assumptions create environmental and economic vulnerabilities that put the financial viability of the mine and the health of the environment at great risk. The woefully inadequate financial assurance (only US$34 million) for a large-scale, high-risk mine operated by an inexperienced, financially-strained mining company risks premature abandonment and transfer of the financial and environmental liabilities from the company to international lenders and the Armenian people.

Examples of best practices that Amulsar has rejected include: evaluate scenarios based on conservative assumptions, building an active mine water treatment plant that will operate before Day 1 of mining and into closure; conducting additional tests to fully evaluate the contaminant leaching potential of all mined materials and create a conservative monitoring, mitigation, and mine management plan based on the results of additional testing; conduct a truly independent evaluation of the amount of financial assurance needed to protect natural resources and human health if the mine is abandoned early; and fund an ongoing independent assessment mechanism to train the local community and monitor and evaluate the mine during operation and closure.

The close proximity to streams and the abundant faults at the site suggest that contaminants in mine water may quickly reach surface water and springs with little dilution. Given the high potential of the mine to release contaminants and the fact that the spent ore and wastes will remain at the site forever, Lydian needs to present more effective and protective mitigation measures to prevent contamination of water used for drinking and irrigation. The waste rock storage and heap leach facilities should be completely redesigned using best practices. The chemistry of water generated at the site must be predicted correctly, with conservative assumptions. The proposed water treatment system should be designed for the updated water chemistry predictions and should show explicitly how each contaminant will be removed before water is discharged to the environment. In addition, placement of the facilities farther away from streams and closer to the pit should be seriously considered.

The Amulsar Gold Project, as proposed, presents a high risk of generating acid drainage and leaching contaminants for decades or longer, because of the inherent characteristics and placement of the wastes and ore, the poor geochemical evaluation, inadequate water quality predictions, overly optimistic mitigation measures, and Lydian’s inexperience. The government of Armenia and its citizens should stop the development of the mine until the shortcomings identified above are corrected.

A complete collection of our technical reports and evaluations for the Lydian Amulsar Gold Project in Armenia can be found here. A brief description of our qualifications can be found here https://goo.gl/KCGgWK. Our reports will remain part of the public record and have been sent to many recipients inside and outside Armenia”.

Open Letter: EBRD investment in Lydian International’s mining project in Amulsar and how it threatens the sustainability of the region

Posted On 3rd November 2017 ~ 0 Comments
On the 26th of October 2017 Armenian Environmental Front civil initiative sent a letter to EBRD, as well as to its office in Armenia regarding…

Posted On 25th December 2018 ~ 0 Comments
Direct democracy won another victory in Armenia.  On December 18, 2018 Jermuk Community Council adopted a decision to approve the collective petition of its community…