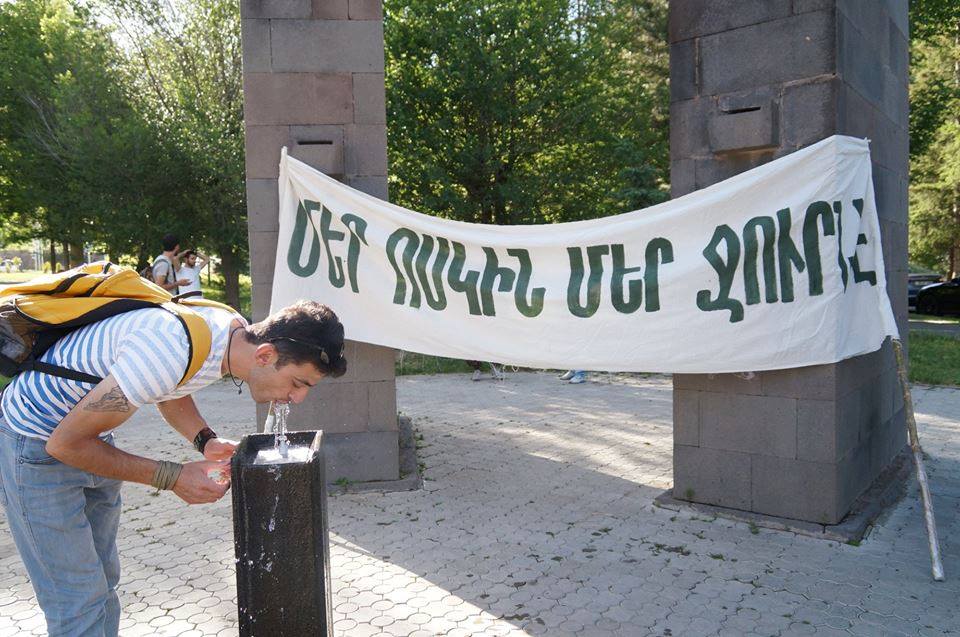 Initially this article appeared on The Armenian Weekly.

It has been over 15 days that the roads leading to Amulsar are closed by residents of the Jermuk community and environmentalists from the surrounding region. Demonstrators have gathered as a display of opposition against a mine being developed near their communities that threatens their waters and their health, the region’s touristic potential, and the famous Jermuk brand of water.

Though Armenia’s prime minister Nikol Pashinyan has called on protestors to open the roads, they have not budged, and have instead expressed concerns that the prime minister’s team is misinformed on the situation.

“During our last meeting it became clear that the new Minister of Nature Protection misinforms our government. During our meeting with the deputy prime minister Tigran Avinyan, he called the minister, who told him that experts changed their critical opinion of the mine site [from negative to positive] after a recent visit, but this simply isn’t true,” said one of the activists from Jermuk Aharon Arsenyan.

In an effort to appease citizens, the government announced that a working group would be formed to examine the operations of all mines in Armenia, starting with the gold mine project in Amulsar. Arthur Grigoryan, the newly appointed head of Environmental Protection and Mining Inspectorate announced on Facebook, “The group will examine the compliance of mines with laws and best standards and based on this, they will provide the government with factual conclusions… The group will include representatives of the communities, civil society, media, experts and specialists”.

Until then, however, the protesters remain firm about not opening the roads. They hope to prevent Lydian Armenia—a subsidiary of the parent company Lydian international, registered on the island of Jersey in the Channel Islands—from carrying out construction.

“We are here to prevent the irreversible losses to nature that will occur if the construction continues,” says another activist Vazgen Galstyan, “this is a fight of conscious citizens for our health, future and nature.”

Locals complain not only about the considerable amount of dust that covers Jermuk and its surrounding villages, but also about the damage to the drinking water pipe of the village Gndevaz that have occurred in the past; pollution that flooded the Arpa river from the construction site; and a declining number of tourists in Jermuk, the rare town in Armenia in which tourism is actually a steady and continuing industry.

The protesters are backed by environmentalists as well as the local and international scientific community. Back in Dec. 2017, a conference was organized by Armenian Environmental Front where local scientists as well as legal experts gave their negative conclusion on the mining project.

Parallel to this process, diasporan Armenian Harout Bronozian, a chemical engineer, had hired international experts to assess Lydian’s documents related to the project’s environmental impact assessment. The experts later visited Armenia and presented their final conclusions at a press conference: “The water resources of Armenia are at risk from development of the Amulsar Project. This sensitive and highly prized part of Armenia should not be a testing ground for Lydian’s experimental methods,” states their release.

So far there have been several marches and protests in support of the closure of the construction works and the mine project itself. On July 1, a car rally and a concert was organized to raise awareness regarding the risks of the mining project.

In turn, Lydian’s workers have also organized counter protests. On June 29, workers—rather ironically—blocked the main road leading to Jermuk and on July 2, they gathered in front of the government demanding a solution.

On July 6, prime minister Pashinyan met with company representatives from Lydian, as well as locals and environmentalists. The purpose of the meeting was to request that construction activities be paused until the conclusions of the working group become available. Lydian International rejected this idea, saying that the working group could make its conclusions parallel to its construction works. In turn, protesters have not opened the roads. The prime minister announced that his government will make a decision based on the obtained facts and make an announcement regarding it at a later date.

Posted On 20th November 2016 ~ 0 Comments
Dear My Armenia Program and Armenian General Benevolent Union (AGBU), As we are following any progress in Armenia that is particularly aimed at developing Armenia’s…

Posted On 2nd March 2020 ~ 0 Comments
On February 28, several members of the Armenian Environmental Front addressed a letter to Honorable Geoffrey B. Morawets, Chief Justice of the Ontario Superior Court…