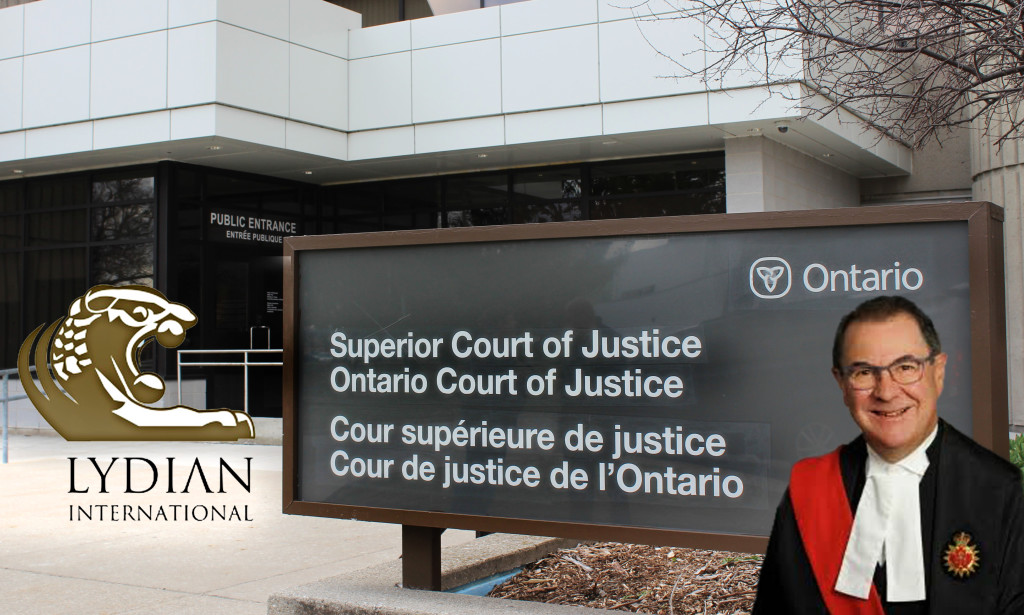 On February 28, several members of the Armenian Environmental Front addressed a letter to Honorable Geoffrey B. Morawets, Chief Justice of the Ontario Superior Court of Justice, Commercial List, specialized in insolvency cases, who presides over Lydian Group’s insolvency protection court proceedings. The letter was copied to Alvarez & Marsal, INC the appointed “Monitor” under the “Companies’ Creditors Arrangement Act”.

Lydian Group is involved in a number of overseas legal proceedings. One is its bankruptcy proceedings in the Royal Court of the Jersey (offshore zone), based on the complaint of Lydian’s creditors. The second is Lydian’s appeal to the Canadian court through its Canadian subsidiary requesting protection from bankruptcy and extension of the Company’s protection to the proceedings in Jersey.

Edward Sellers, the CEO of Lydian Group, assures that the Company’s subsidiaries are undergoing restructuring, they are looking for new funding for relaunching the Amulsar projects, and in case this turns impossible, are soliciting interest in financing the Treaty Arbitration; they are also actively attempting to sell the Company. Taking into consideration these efforts of the company, Edward Sellers requests the Court to protect from bankruptcy. The court hearing this case is lead by Justice Geoffrey Morawetz, Chief Justice of the Ontario Superior Justice Court specialized in insolvency cases of companies undergoing restructuring.

The Armenian Environmental Front informed the Court and the Monitor about having detected over two dozen instances of factual misrepresentations, and therefore, material misleading, in the affidavit of CEO Edward Sellers sworn in December 2019. Additional information regarding court decisions affecting Lydian’s assets in Armenia, as well as official documentation supporting the above mentioned instances, were also forwarded to the Court.

Lydian Group’s Motion Record presented by its lawyers (who are, in fact, also unsecured creditors of the Amulsar project), including the affidavit of Edward Sellers sworn in December 2019, are published in the website of the bankruptcy “Monitor” Alvarez & Marsal, Inc. These legal documents include numerous instances of slurs in relation to the Armenian Government and other relevant state institutions. Nevertheless, the Government has not reacted to the above mentioned in any visible way.

Analysing these documents, responding to them and defending the interests of the Armenian citizens and the state are not the tasks of our volunteer activist group. This is the duty of the Government of Armenia. We have been forced to spend weeks requesting for official information from state bodies in order to collect evidence on this matter, whereas all pieces this evidence were fully available to and under the disposition of the Government.

It is also a responsibility of the Members of Parliament to raise the issue and ask queries to the members of the Government in case the latter fails to perform its duties. Both institutions have failed to fulfill their direct responsibilities even though our group had been informing them about the matter by sending letters and publishing information and sources of relevant files.

Not only has the Government been irresponsible in this matter, but also another state institution, the Environmental and Mining Inspection Body (EMIB) has consistently failed to participate in any of the court hearings in the framework of “Lydian Armenia’s” claims against EMIB. The expected result of this behavior, the Administrative court’s ruling upheld the claim of Lydian Armenia and declared invalid eight of the ten points of the EMIB’s order according to which Lydian Armenia was in breach of Armenian legislative requirements including that Lydian Armenia had engaged in illegal mining activities during the construction phase of the Amulsar Project. Although the EMIB announced that it finds the decision of the Administrative Court in breach of law and that it is going to appeal the court decision to the higher court instance, valid questions remain – why did the EMIB not attend ANY of the court hearings on this matter and protect its supervisory decisions, and what else did they expect from the Administrative court in a situation of their inaction?

Judging from the behavior of the state institutions, we have grounds to claim that either the Government of Armenia positions itself in support Lydian Group or it can be blamed for inaction on this matter, which is equated to supporting the Company. Not only has the Government not made sanctions in relation to misleading conducted by the company for the past 8-9 years, it is also consistently erasing the efforts of other state and non-state actors.

About gold mine project in Amulsar presented by Lydian International

Posted On 12th January 2018 ~ 0 Comments
It is no news that on December 24, 2017, international independent experts declined the invitation of Armenia’s Minister of Nature Protection Artsvik Minasyan to participate…